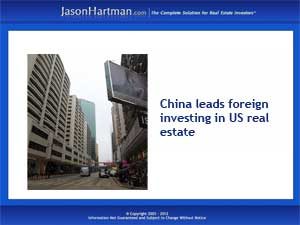 The latest wave of foreign investment in US real estate comes from China. Chinese investors backed by government funds are pouring money into a variety of projects and properties around the country – and they’re being welcomed with open arms by many US sellers and brokers, who see a hefty infusion of money into an economy still struggling to regain its footing.

In past years, Asian investing was viewed with suspicion. The Japanese went on a property-buying spree a few years ago, purchasing properties ranging from apartment houses to chunks of Americana like the Rockefeller Center. Those purchases sparked fears that the US would end up being “owned” by foreign investors. But money troubles at home caused Japanese investors to retreat, and since then foreign investment has been dominated by European and Indian buyers – until now.

What’s different this time around? A struggling housing market and a sluggish economy are ready for new money and new growth, and Chinese investors can provide both. A recent New York Times article pointed out that the Bank of China is now the largest foreign lender in US commercial real estate, and the Chinese government holds over $1 trillion in US Treasury Securities.

Though much of the Chinese investment funding goes to commercial real estate, a sizable portion is also being directed toward home buying, particularly in higher end markets around the country, and in building new apartment complexes and condos in desirable areas.

Foreign investment depends heavily on what happens at home – and a different climate in Beijing could change the picture of Chinese investment considerably. But for now, Chinese investors are putting their assets into many markets and many kinds of projects – a strategy of diversification that, as Jason Hartman says, is the recipe for real estate success. (Top image: Flickr/balescristian)