Smart Investors See the Forest and the Trees 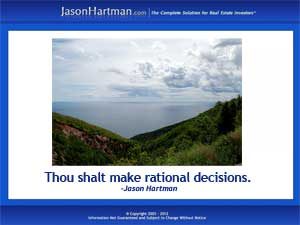 Jason Hartman’s first 10 Commandments for Investors laid down some key pieces of advice for making smart investing choices for building wealth. Now, he’s created the next 10 commandments, which elaborate on the first ten and add new advice for a successful investing career. But according to a new study, the effects of stress can interfere with putting those recommendations into practice.

Commandments 14 and 15 in Jason Hartman’s new set point up the importance of thinking ahead and working toward a long-term vision. “Thou shalt make rational decisions, “ says the fourteenth Commandment, reminding investors to be wary of impulse decisions that grab the heart, not the head. Keeping a cool head and refusing to be swayed by impulse can prevent a lot of regret later on. And, “Thou shalt look at the big picture,” says Commandment 15, pointing out that it’s essential to think in terms of long-range goals and create strategies to make them a reality.

These two recommendations go hand in hand with the advice of the first ten, which advise investors to educate themselves about investing and keep control of their investing efforts. But there’s a saboteur waiting in the wings, ready to derail the best efforts to put the commandments into action: stress.

A new study on the effects of stress examines the way both chronic and short term tension can affect the brain’s ability to process information, adapt to new situations and, yes, make clear decisions and plan for long term goals. Brain chemicals released as part of the stress response can actually inhibit that kind of thinking, researchers learned – by boosting short term thinking power, increasing attention to the present moment rather than the future, and damping down the ability to reflect on events.

And it’s those abilities – to see the forest, not just the trees, and to detach from impulses in the present to make thoughtful decisions based on facts, good advice and logic – that create the foundation for building wealth. Successful investors look toward the future with a plan in mind and a clear vision of the steps needed to get there and those steps guide the decisions they make.

But if you’re under stress, your ability to do that is impaired, which paves the way for impulse buying and limited thinning. When the brain is flooded with stress chemicals like cortisol and adrenaline, we lose perspective and the capacity for weighing options is impaired, so it’s more tempting to grab the first option that comes along. We focus only on what has to be taken care of immediately, so it’s difficult to slow down and take stock of better options.

It’s important for everybody to manage stress – but for investors, staying calm makes it easier to build wealth by following Jason Hartman’s Commandments for smart investing. (Top image: Flickr/argyll)

How to Make$1 Million Per Hour