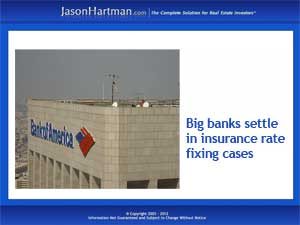 The nation’s three biggest banks, already poster children for a variety of fraudulent practices, have now added insurance fraud to the list of offenses that keep bringing them to federal court. This time, the problem had to do with “force-placed” homeowner insurance that charged property owners much higher fees than policies on the open market. And some home owners fought back.

The latest lawsuit, filed on behalf of a couple of property owners, names Bank of America – who else? – but also involved HSBC Holdings Plc, a British – based banking and financial services company with branches in several countries including the US. It accuses the defendants, but particularly Bank of America, of rate fixing in the forced place insurance they imposed on risky borrowers.

Homeowners insurance and its close relation, landlord’s insurance, are a familiar part of property ownership. Policies like these protect owners of residential property in the event of a variety of problems. But forced, or forced place, insurance is different. This is a kind of policy that’s placed by banks or mortgage lenders on houses and other high-end purchases such as cars as protection if it seems that a borrower doesn’t have enough coverage, or if their own insurance policy lapses. In this way, the bank has some protection against losses.

But the problem arises with the source of that insurance. Bank of America, andm in similar cases, JP Morgan Chase and Citigroup were accused of force placing insurance at far higher rates than policies available elsewhere. The case was settled before it reached the courtroom. Though the amount of Bank of America’s settlement in this instance wasn’t disclosed by attorneys, Chase and Citigroup settled on this issue for around $100 million each.

It may seem that news that the big banks blinked yet again when faced with charges of bad faith and manipulation doesn’t have much impact on the average home buyer – or investors hoping to build wealth through income property, like Jason Hartman advises. But unlike many of the other legal actions pressed by state and federal officials, this one was filed by property owners themselves, who claimed they were unfairly charged for the insurance.

And thought the lawsuit assumed a higher profile than it might have done with smaller financial institutions as the defendants, and the amounts these firms settled for represents a drop in the bucket of their holdings, it demonstrates that in some cases, an angry David can bring the banking Goliath to its knees.   (Top image: Flickr/PhilipTaylor)

Read more from our archives:

How to Earn $1 million Per Hour