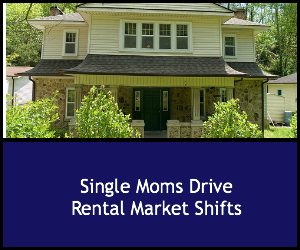 More than half of American children live with a single mom. That’s the finding of a new study on the changing demographics of American culture – and those numbers, and the economic realities behind them, mean new challenges and opportunities for rental property investors.

The new findings by researchers from Princeton and Harvard aren’t really new. The trend toward single-mother households was first noted in studies dating from the 1960s. And while research into the impact of that rend focused mainly on the outcomes for children, the shift from the traditional two-parent household has implications for a multitude of other sectors – especially rental housing.

Early research into the growing number of households headed by unmarried women with children looked largely at inner-city households, mainly characterized by a black mother receiving public assistance. But as the new studies point out, that’s only one part of the single-mother profile. As home ownership stays out of reach for many struggling Americans, this kind of household is likely to play a major role in shaping the future of the growing rental market for years to come.

Single mother households take many forms, and the only thing they really have in common is that the sole support of the household is an unmarried mother of dependent children. But that mother might be an urban teenager struggling with poverty and a lack of education, a suburban college graduate left to cope after a sudden divorce, or a midlife professional woman who made the choice to have a child without a partner.

These households don’t fit the traditional picture of a solid American family. And for many of these single moms, that picture is completely out of reach. Varied profiles aside, single-mother households tend to be less affluent and less stable than those with two parents – and two incomes.

Single mothers may be struggling to make ends meet in the wake of a divorce or separation from the children’s father. They may have been forced to leave a violent home. They may be juggling a low paying job (or more than one), school and child care with little support. And buying a house may be a virtual impossibility – even with new lower down payments available on mortgages from government lenders like Fannie Mae, Freddie Mac and the Department of Housing and Urban Development.

These households aren’t the only ones feeling the economic pinch – and fueling the demand for rental hosing of all kinds. The pool of renters has seen dramatic growth in the years since the fabled housing collapse of 2008 as homeowners lost their houses to foreclosure. A downturn in employment meant that more people couldn’t qualify for loans or make mortgage payments.

And the shifting demographics of American society created new groups of people who just aren’t interested in home ownership: the millennials, who are struggling with student debt and postponing marriage, and retirees, who are selling homes in favor of smaller dwellings, greater mobility and access to amenities.

All these groups offer both challenges and opportunities for investors working to build wealth with rental properties. Recognizing just who these new renters are and what they want is a key to creating a stable base of long term tenants for a long term ROI.

How can investor/landlords accommodate the growing number of single-mom households? Like those other growing tenant groups the millennials and the seniors, single mothers look for safe housing near schools, daycares and public transportation. Though it’s against fair housing law to target – or shut out – any particular group, property owners can list kid friendly amenities and advertise rentals in appropriate places.

Because many of those households are headed by lower income, typically young mothers, some investors might want to consider working with HUD and other agencies on programs like Section 8 housing, which assures regular rent payment sand a steady stream of tenants. Section 8 waiting lists are long, sometimes taking years, as renters can remain on the rosters indefinitely.

Domestic violence accounts for a large percentage of single mothers forming their own households, too, and domestic violence advocacy services may work with landlords to help clients with move in expenses such as deposits and first and last months’ rent. Letting these agencies know that you’re willing to rent to their clients is another way to create an ongoing tenant stream.

The cultural landscape is constantly shifting. Investors who stay informed and diversify their holdings will be able to take advantage of those changing trends = and build wealth in the new year and beyond.  (Featured image:Flickr/wonderworks)