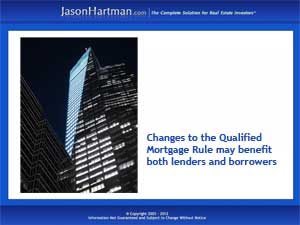 The Qualified Mortgage Rule won’t become official until 2014, but already federal regulators are proposing changes to its mortgage lending provisions. That’s a move hailed by housing industry professionals and advocates who feared that the Rule’s tighter lending standards could strangle the housing recovery.

The QM Rule was introduced by the Consumer Financial Protection Bureau in January 2013 as part of wide-ranging legislation designed to prevent another housing collapse from mortgage defaults. The rule established a 20 percent down minimum for housing purchases and laid out clear credit requirements and other standards for mortgage applicants.

in this way, the QM Rule also protects lenders from lawsuits of the kind facing the nation’s big banks, whose practices in making subprime loans led to the housing collapse. With clear standards for mortgage loans, the theory went, both mortgage applicants and lenders could be protected – and the chances of mortgage lending abuse would be greatly reduced.

But it turns out that the rule intended to save vulnerable applicants from themselves as well as predatory lenders could create conditions that slow home sales by locking out buyers who couldn’t make the 20 percent down or manage the higher interest rates that come with paying less.

So a new variant of the proposal, called the Qualified Residential Mortgage rule, or QRM, aims to address the problem. Previously, lenders were expected to retain a “risk retention” stake of 5 percent on those riskier loans. But the new QRM Rule eliminates that requirement and opens doors for otherwise qualified applicants who can’t put down 20 percent.

Under the new terms, lenders are still free to make whatever loans they choose. That means they can underwrite as many non-QM loans as they like. But those risky loans won’t be protected from future lawsuits for mortgage fraud.

The new changes have been welcomed by housing advocates and industry watchers alike, who see the elimination of high down payments as a victory for everybody –lenders, home buyers and the housing recovery too. And that includes investors following Jason Hartman’s guidelines for building wealth in income property. (Top inage: Flickr/arguella)