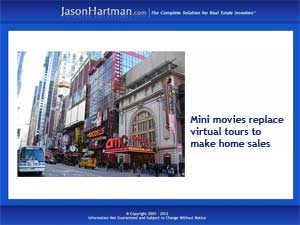 First it was photography. Then it was the virtual tour. Now a new trend is giving new meaning to the idea of a home move, as high end home sellers hire film companies to create mini-movies to sell their houses – complete with script, actors and even theme music

Video has been a potent tool in home sales for a while now, since the rise of sites like YouTube and the wide array of social media platforms. And according to a recent survey by the National Association of Realtors, 14% of sellers in 2013 used video to sell their homes a jump from 9% just five years ago.

The ease and popularity of video making and sharing mean that anyone can post a virtual tour of a home for sale. But the new kind of video is shot by professionals, like a movie trailer or music video, meant to create a mood, a theme or message that can pull a buyer in.

How does the mini-movie work to sell houses? The answer, say real estate professionals, is simple: a movie can capture a house’s “story,” convey emotions that resonate with viewers and trump facts and figures when persuading a buyer to take the plunge. Make a house-hunter feel as if they’re sharing in the vibe on the screen and they’ll be hooked, say film makers who create these little movies.

“Home movies” of this kind so far have been reserved for high-end home sales, with prices approaching a million dollars or more. And the movies themselves are produced by firms specializing in shooting commercials, music videos or documentaries. They bring to the job all the sophisticated equipment and editing of those projects. And of course the price tag is high – but that’s not such an issue when the end product helps to sell a very expensive house. In some cases, budgets for movie making are written into the home’s total cost.

Not everyone is sold on the new concept, though. Producers of the more traditional home tour videos say that the scripting and storylines distract viewers from the point of the exercise – to showcase the house. And some real estate professionals point out that making a movie is only worthwhile in slower markets that allow time to make and market the movie.

Still, the new home movie ranks with home styling as another way to grab prospective buyers by the heart, not the head and offers some more insight into what really makes a sale. The trend has also reached the rental market, as investors and landlords create mini movies that showcase homes and apartments for rent as well. And it’s created a new kind of professional too – video makers specializing in real estate.

Since the advent of photography, it’s been clear that images sell houses. But as competition becomes fiercer and stakes higher, the Hollywood treatment is the newest weapon in the home seller’s arsenal. (Top imaage: Flickr/Siebol)

Source:
Jackson, Candace “Your House is Ready for its Close-Up.” The Wall Sstreeet Journal. onlinewsj.com. 20 Aug 2013