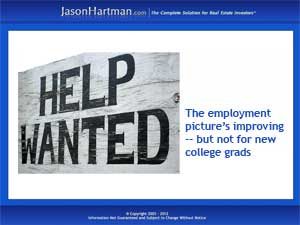 New labor statistics are out for May 2013: 175,000 new jobs added. That’s good news for an employment picture that’s remained stagnant for some time. But some economists fear that this upturn is far from the numbers needed to jumpstart the economy, particularly since one group – the “millennials” are conspicuously absent.

According to a recent Daily Ticker article, the labor numbers indicate that more people are actively participating in the labor market through part or full time work. But many of the jobs added to that market are on the low end of the salary scale, with limited possibilities for advancement. While even these jobs offer ways to jump-start other sectors such as housing, this kind of growth still remains far from a major step forward out of recession.

That outlook, some financial experts worry, may create a whole “lost generation” of young people who leave college faced with limited opportunities for finding work in their degree areas and fierce competition for the jobs that are available. And if a new graduate is able to snag a mid – to low-paying job just to pay the bills, they may end up trapped there if no positions open up in their degree fields.

Some members of the millennial generation are solving the problem by simply putting off the job search – staying in school for graduate and post graduate work until things change. But that means racking up more and more student loan debt. There’s credit card debt as well, to cover ongoing expenses. When these graduates finally emerge into the “real world,” the debt load may keep them from making major purchases like houses and cars.

Others may simply give up and settle for minimal work and a room in the family house.But the skills learned in college become outdated and their chances of getting a foothold in a career field diminish as they fall into default on those student loans that made it all possible.

The troubles of this potential “lost generation” can ripple throughout the entire economy, with the potentqal to offset gains made by other groups on the employment front. Loss of purchasing power in this group may mean fewer houses sold, fewer consumer goods purchased, and less participation in the economy and the society as a whole.

Rescuing the “lost generation” of twentysomethings is a complex task. But one answer, say some economists, may lie in thinking outside the box, encouraging entrepreneurship instead of employment, and investing to build long-term wealth. And that’s a path that, as Jason Hartman says, can begin at any age.  (Top image: Flickr/sarachickad)

Dinosaur Degrees: Are Four-Year Colleges Worth It?

Going Green Pays Off in  the Housing Market