Dinosaur Degrees: Are Four Year Colleges Worth It? 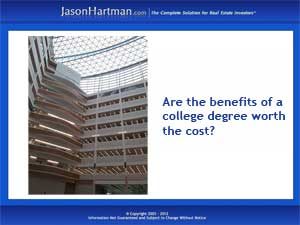 For many of the so-called “millennial” generation – newly graduated from college, or recent grads in the last five years or so – the old advice about getting a degree to get ahead just doesn’t apply. As more graduates are facing decades or more of student loan repayments, a new Forbes article reports that many of those recently surveyed said they regretted going to college at all.

As we’ve reported in previous posts here, it’s no secret that ballooning student debt is taking its toll on many areas of the economy notably housing, as these debt-ridden graduates put off many traditional life milestones like buying cars and houses. Some never get there – loan defaults damage their credit so severely that they can’t qualify for these other purchases at all. That’s why, since recent studies reveal that over two thirds of graduates from traditional four year schools finish their college careers in debt, 51 percent of the students surveyed by Forbes said they wished they’d gone to work after high school rather than college.

Those responses come at a time when many colleges are also facing drops in enrollment due to rising costs. And they lend new weight to an old argument: in today’s information-driven world, with its fragmentation into millions of niches and sub-niches and opportunities for entrepreneurship. Is the traditional college education really relevant anymore?

Those who say it isn’t point to the fact that a student committing to a major today may find that the field – and the job outlook — will have completely changed by the time graduation rolls around. And there’s no guarantee of finding a lucrative full time job that allows for paying down loans.

Many of today’s most successful individuals have no college education at all – or their college degree has no connection to their successes. And the rise of alternatives to traditional colleges, such as community colleges that offer “starter” degrees with hands on training aimed at employment and online colleges that provide niche-specific training in high-demand fields such as information technology and forensics, allow students to get a more affordable –and relevant – education that gets them into the working world more quickly.

For the entrepreneurially inclined, mentorship and networking take the place of the traditional alumni associations and societies that used to provide channels for job seekers. On the Internet, qualified professional advice is just a clink away around the clock, too.

Defenders of the traditional four-year college experience say that a degree opens doors to higher paying work and offers students a chance to mature. But those high paying jobs don’t pay out immediately for new grads and are out of reach for many – hence the cliché of the PhD serving burgers at McDonalds. And the burden of student loan debt gobbles up a portion of that income anyway.

The student loan debt problem –and it impact on housing and the economy as a whole –isn’t going away any time soon. What college-age Americans choose to do about it remains to be seen. But for investors following Jason Harman’s guidelines for building wealth in income property, their decisions may change the housing landscape for good. (Top image: Flickr/gorogen)