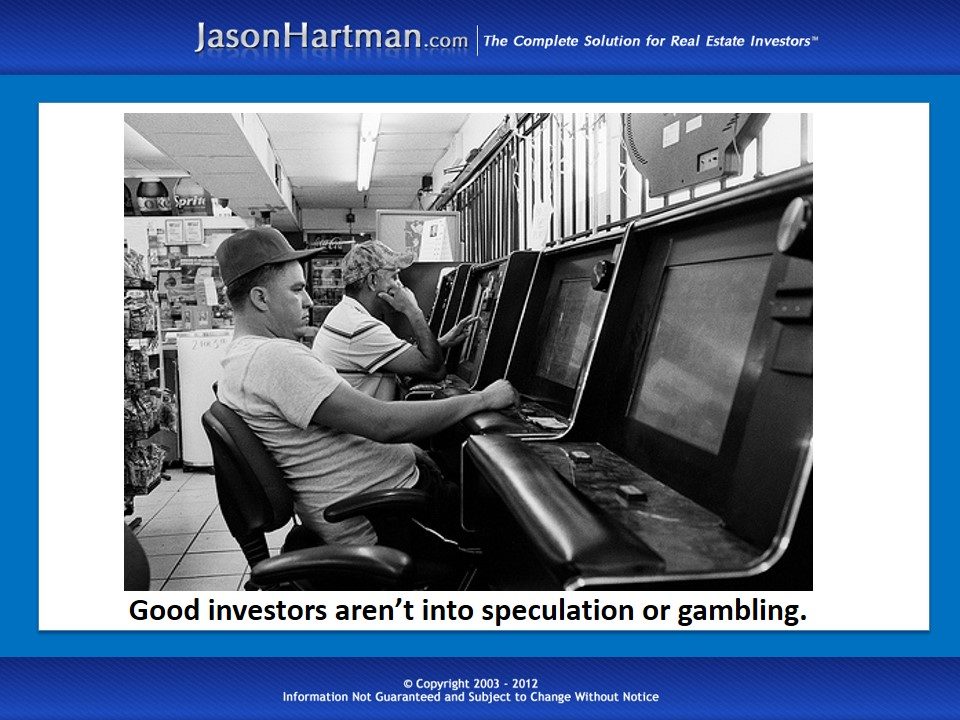 While you may have heard the old adage that you should put your money into your house (income property or otherwise) Jason Hartman advises that you keep your money where it belongs—in the bank. By putting a minimal amount of money into the property you use more leverage and reduce your risk.

Though it may seem to be the other way around, the borrower of money is actually in the position of power. They’re getting loan modifications and bailouts. Meanwhile, the saver of funds and payer of cash who didn’t over-leverage are getting the raw end of the deal. It isn’t necessarily right, but it is the way it is.

As an investor, you always want to remain in a position of power. History tells us there will be highs and lows, but with income property, you’ll come out ahead. Chances are, you know someone who has made money in real estate. And you might know someone who has lost money too—but there’s always more to that story. The property probably didn’t make sense the day they bought it, the purchase was made for speculative reasons, it had bad cash flow, etc. This person probably ended up selling for a loss because they put themselves in a position of high risk.

While the real estate cycle also goes up and down, it maintains an upward trajectory. To make the most of your income properties, avoid speculation and gambling and don’t expect to get rich quick. True investing is the process of creating value over time, which means that investments that do not produce income or rent are not investments—they’re speculations.

Unlike investments like gold, real estate allows you to use other people’s money. Only around 20% of what you’re investing is your own cash. With gold, you’re not going to get a 30 year loan at a fixed rate. You’re not going to be able to use it as a tax deduction, and you aren’t going to get an interest rate that’s the lowest it’s been in 40 years. You aren’t going to find someone to rent your gold. You are simply speculating.

Vacant land is similar in that it doesn’t, as is, produce income. Some folks make money from it, while more end up losing it. Make your investment decisions by following a simple investment philosophy—it has to produce income in order to qualify as a conservative, good investment. (photo credit: Mark Nye, ClubofHumanBeings.com via photopin cc)

* Read more from JasonHartman.com
Historical Trends in Real Estate
Learn How to Create Wealth for Free