Millennials: Shaping the Future of Housing? 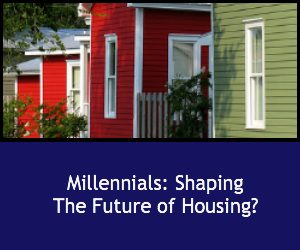 Does the future of the housing recovery belong to the Millennials? Mark Fleming thinks so. On a recent appearance on The Creating Wealth show, Fleming, First America’s Chief Economist, tells host Jason Hartman that this demographic is one to watch in the “new reality” of today’s housing market.

Fleming, whose company First America and its various subsidiaries and affiliates are heavily involved in housing related financial activities, stops by The Hartman Media Company’s flagship podcast to talk about what he sees as long term trends in the interplay between home buying and rental housing over the next decade or so.

Is The Recovery Slowing?

In the years after the catastrophic housing meltdown of 2008, the US housing market as a whole has been on a slow road to recovery. It’s a recovery that’s been measured by many metrics, ranging from new home construction to availability of existing houses for sale to the rate of rising prices.

But, as Fleming tells Jason, although the housing market has made significant gains since the collapse, it still hasn’t rebounded to an optimal level. Fewer homes are being sold – and home ownership is still hovering near historic lows, around 60%.

That’s well below the “best” rate of around 65% seen in the late 90s, which, Fleming says, keeps major housing markets functioning at their peak. Higher rates can signal trouble, though. In the years running up to the collapse in 2008, homeownership surged to 69% – largely thanks to a rush of unqualified buyers. That created conditions for the massive wave of mortgage defaults and foreclosures that plunged the housing market into chaos and the country into recession.

The foreclosures that triggered that great housing collapse are still a factor dragging the recovery –at least in certain markets around the country. In the wild abandon of the “housing bubble” years pre-2008, lenders made mortgages available to virtually anyone who applied, at deceptively low introductory rates and, in many cases, with vague and hurried explanations about how such an adjustable rate mortgage, or ARM, would work over time.

That meant that when rates ballooned, as they were destined to do, many homeowners were left unable to manage the mortgage they’d been sold just a few years before. Many ended up “underwater,” in default or outright foreclosure. And as Fleming points out, the fate of those foreclosures has played a pretty significant role in the stalling of the housing recovery.

The fate of those foreclosed homes varies widely. Some became “zombie” properties, abandoned by owners yet not seized by the banks. Others. In the so-called “judicial” states where foreclosure proceedings require a court hearing, became stuck in what was then called the “foreclosure pipeline” – waiting in limbo as case after case worked its way through a clogged court calendar.

Often, owners of those foreclosed homes in judicial states simply outwaited their creditors, continuing to live in the house, often for years, without making payments while their foreclosure cases percolated through the courts.

Even in the so-called non-judicial states, where no court hearing was needed for foreclosures, that kind of action cases a certain paralysis. Lenders, suddenly finding themselves saddled with repossessed houses, sold in bulk at auction, or waiting for delinquent owners to be tracked down.

Millennials May Drive the Recovery

The foreclosure situation and other factors including rising prices may have slowed the recovery and kept more potential buyers from taking on a home purchase. But, Fleming says, a far bigger factor is the shifting values and lifestyles of the nation’s biggest demographic group – the Millennials.

Those values and lifestyles have been dissected time and again in the popular press. These young adults under the age of 35 have been accused of indifference to the American dream in a number of ways, from a lack of investment in the work force, to lack of interest in consumerism, to apathy toward embracing eth traditional milestones of adult life such as marriage, family and, yes, home buying.

Even as home buying suffers, the demand for rentals is surging. And while the pool of renters is larger than ever thanks to the aftermath of the collapse and other factors making it hard to buy a house, a key factor contributing to both sides of the housing equation is mobility.

Millennials tend to prefer mobility to being “tied down” with a house. Job opportunities, a wish to travel, postponing marriage and family have all been cited as reasons that Millennials as a group prefer rentals to home ownership. And because their numbers are so large, Fleming expects that trend to continue for at least a decade or so.

What happens then? Millennials move into a different phase of their lives. As careers settle and Millennials move into their late 30s, early 40s and beyond, Fleming notes, their attention is likely to turn again to home buying – a frequent choice when jobs and growing children force a choice between mobility and stability.

And as that happens, expect the housing market to swing back to homeownership, driven once again by the choices embraced by the largest age cohort in US history – one that eclipses even the legendary Baby Boomers.

A “New Reality” For the Housing Market?

Knowing all this, what would Fleming himself choose to do if he were investing today? To answer this question, Fleming echoes one of Jason’s own commandments for successful investing: know the market. And keep an eye on the future, to see where the market is headed.

And where is it headed, in Fleming’s view? Millennials will rent until they begin to form families, and then the number of single-family homes will drop as they’re snapped up by the sheer number of these young buyers. But if pricing checks and balances aren’t in place, these student debt ridden young people may not be able to buy the starter homes they want.

The housing market as a whole may never return to the one we knew before the crash. But, as Mark Fleming tells Jason In wrapping up the podcast, investors who embrace this “new reality” of home buying and renting can build wealth for the long term.  (Featured image: Flickr/byrdiegyrrl)