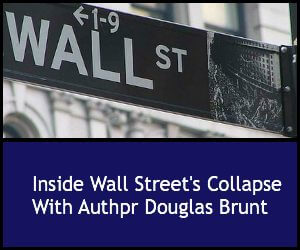 On a recent “Flashback Friday” episode of his signature Creating Wealth Show, real estate expert Jason Hartman revisits the heady days before the historic financial collapse of 2008 in a conversation with Douglas Brunt, author of the novel “Ghosts of Manhattan.”

In the early years of the twenty first century the high stakes high finance world of securities trading and financial deal making was soaring. Wall Street brokerages were places where traders just out of college could make multimillion-dollar salaries and deals were closed at fine restaurants and strip clubs where the bar tab was a business expense and big rewards went to those who could close the most deals.

That’s the world that forms the backdrop for author Brunt’s first novel. And while his protagonist Nick Farmer is fictional, the meticulously researched details about life in the Wall Street fast lane aren’t. Blunt tells Jason that the events of Nick’s story reflect the very real world of Wall Street trading before the roof caved in – and the novel explores what those events meant for the financial professionals involved.

Brunt’s story is set in the heyday of top tier investment firm Bear Stearns, around 2005-2006. Like many firms of its kind, Bear Stearns was making big money from securities trading and the freewheeling home mortgage market. In Bear Stearns’ heyday, work didn’t stop and the end of the work day. There was wining and dining to do, strippers and hookers to provide to the clients who could bring in the best deal – an exciting and lucrative lifestyle that could eventually wreak havoc on marriages and families.

Those are some of the issues Brunt explores through the Nick Farmer’s story – and the insights gained from his research allow him to offer some perspective on the factors that contributed to the great crash of 2008 and the near collapse or outright failure of the titans of Wall Street finance.

Bear Stearns itself was one of those failures. It failed completely in i2008, and was eventually acquired by JP Morgan Chase, which quietly discontinued its name in i2010. But Bear Stearns wasn’t the only institution of its kind to face a crisis in the fall of 2008.

The crisis left millions of homeowners in foreclosure or “underwater” with mortgages they were ill prepared to carry. The effects rippled through the economy and even broad – and led to the creation of the Dodd Frank Act to impose tighter standards on the mortgage industry and protect consumers from themselves.

Dodd Frank and other efforts like it point up some of the key causes that led to the collapse. Brunt’s research for “Ghosts of Manhattan” yielded five major factors that, he says, collectively created the conditions leading to the housing collapse and the events that followed.

A government mandate to promote home ownership. From as far back as the Clinton administration and even beyond, the government has been actively promoting home ownership as a mark of a stable society and an invested citizenry. The idea that home owners hip should be accessible to all laid the foundation for loose lending policies and loan products aimed at putting homeownership with in the reach of the most marginal of home buyers.

Irresponsible lending on the part of the banks. According to Blunt, in the broadest sense, the nation’s financial institutions were carrying out the intent of the government’s pro home ownership stance. But that led to millions of bad loans and risky loan products made to borrowers who didn’t understand them and couldn’t pay them off.

The leading example of these misleading, oversold loan products was the Adjustable Rate Mortgage, offered at ridiculously low introductory terms that soon ballooned out of a borrower’s reach.

Wall Street’s eagerness to bundle mortgages into securities and resell them. As Brunt points out, bonds backed by risky mortgages are doomed to fail. Yet major financial instructions, Bear Stearns among them, packaged and repackaged these bundles, with the same loans appearing multiple times as they were sold and resold.

No challenges to the bond ratings awarded by Moody’s and Standard and Poor’s. These two financial services companies gave the resulting bond products an A rating. And this, according to Blunt, effectively allowed those flawed financial products to “hide” from further scrutiny.

The AIG’s willingness to issue “credit derivatives.”  Credit derivatives are essentially insurance based on assurances that the securities backing them will not fail. The move by the American International Group, a global financial company that services the majority of Fortune 500 companies, was a process Brunt likens to selling 10 homeowner’s policies on a house that’s burning down. With more derivatives being sold than loans to back them, the enterprise was doomed to collapse.

Could a change in any of these factors have prevented the collapse? Brunt points primarily at Moody’s and Standard & Poor’s willingness to cover these bad instruments with their highest rating. An honest evaluation could have prevented the rampant reselling of these products – but greed and a wish to make money at all costs prevented that.

Could such a collapse happen again? Jason poses this question in conclusion, pointing out that increased regulation imposed in the wake of the collapse could actually encourage a repeat, by way of limiting the number of players in the financial game. And Brunt also observes that changing the way traders are compensated could encourage long term plans rather than short term wins at all cost.

Brunt’s novel brings recent history to life with an in-depth look at a world soon o collapse. And the points he makes about the causes of that historic crash are as relevant today as when they were first raised – on the original air date of this Flashback Friday episode of The Creating Wealth Show. (Featured image: Flickr/southbendvoice)
More from Jason Hartman:

CW534: FBF – The Collapse of Bear Stearns with Douglas Brunt, Author of “Ghosts of Manhattan” & Former CEO of Authentium