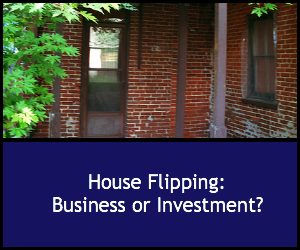 House flipping has been in the news lately as another way to make money from residential real estate. But is flipping houses ns a sound investment strategy – or a business model? On Episode 533 of the Creating Wealth Show, Jason Hartman chats with his former co-host turned house flipper Steve about the upsides and downsides of this aspect of the residential real estate market.

Steve, a Utah based real estate expert, has worked with Jason Hartman’s Platinum Properties Investors Network as an investment counselor, helping clients launch investing careers in rental real estate. Now, he flips houses for a living as a franchisee with HomeVestors – the company made famous due to its slogan “We Buy Ugly Houses!”

What is House Flipping?

House flipping is the practice of buying distressed houses cheap, doing some quick fix ups and then selling the property quickly for a profit. Flipping hit the headlines after the devastating housing collapse of 2008, when millions of homeowners found themselves either in foreclosure or “underwater” – unable to pay off the mortgage that secured the house.

With so many troubled homeowners looking for ways to get out from under homes thy could no longer afford, house flipping gained popularity as a way to make money by “investing” in these properties and then selling them.

But as Steve points out, the investing model of building wealth with income properties is very different from that of flipping houses – and hopeful investors looking for a largely passive way to realize ongoing income from purchases of residential real estate may well be disappointed.

Those hoping to make money through investing in rental real estate may be tempted to try flipping. But house flipping isn’t investing. That’s an entirely different model of realizing income from residential real estate. Investing is a buy and hold strategy – over time, an investor’s property assets generate income on a regular, longterm basis.

House flipping, on the other hand, is a business. If investing success depends on buying and holding an asset, business success depends on buying an asset for a low price and selling it for a higher one. Flipping depends on repeated transactions over time – and while it can be lucrative, it isn’t for everyone. As Steve tells Jason, successful house flipping calls for skills, mindset – and capital – that not everyone has, or can acquire.

House Flipping is a Multifaceted Operation

House flipping can be a volatile, risky business. Although flippers use a varie4ty of different strategies to get leads on potential properties, it’s still, as Steve says, a numbers game. HomeVestors and many other flippers rely on mailings to locate properties – postcards or letters sent out to targeted communities where likely properties might be located. Some campaigns land several leads, others none at all.

And once a property is identified, the next step is to talk with the seller and make a deal. That in itself can be a risky operation, and Steve has many stories to prove it. As he says, successful flippers are also part legal aides and part social workers.

Hosues ripe for flipping often reflect the owner’s struggles with legal issues, poverty and other ills. There may be hidden reasons why they want to sell the property fast, no questions asked. And once the sale is concluded, the property has to be fixed up for resale – a processe that can be time consuming and relatively costly.

House flipping calls for capital to fund not just the purchase of a property, but also the associated fees and costs for repairs and improvements to get ready for a fast sale. That’s why many flipping deals are done mostly, or entirely, in cash. And once the dust settles from the resale, a flipper may not see much of a profit. This business model requires dedication, patience and a willingness to always be on the hunt for the next deal.

Although many early flippers started out with using their own resources, the game has changed. Flippers today rely on the time honored Other People’s Money in models such as signing on to a franchise like HomeVestors, approaching hard money lenders, or becoming part of a group.

Can you make money flipping houses, even in today’s real estate market? As Steve tells Jason, you can – but successful house flippers knew that they’re running a business, not accumulating assets for long term investment income as Jason Hartman and his investment counselors recommend.  (Featured iamge: Flickr/PaperCat)