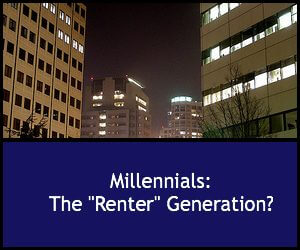 Coming your way: a new generation of (probably permanent) renters. It’s the millennials, making news once again for the basic contradiction of their lives: better educated than their parents, but simultaneously economically more disadvantaged. And because this generation is both the largest demographic and one of the poorest, their circumstances may mean new opportunities for income property investors.

According to census data reported in a recent article from The Atlantic, the median income for the nation’s youngest members of the workforce lags far behind that of their parents at similar ages and locations. On average, young working adults today earn $2000 less than their parents did.

That’s no surprise given the current economic climate and the large amount of student debt carried by many new and fairly recent college graduates – debt that will likely shadow them for the length of their professional lives. And that’s assuming that they’ll be able to enter the profession they trained for.

Securing solid employment is a challenge for this generation in an era of stagnant job growth and declining demand in key fields. And the picture is even worse for those without a college degree, since job options are even more limited. For college dropouts who ended up without a degree but still have student loans to pay off, things may be even worse.

Still, as the Atlantic points out, comparing today’s young workers with their parents at the same age may be like comparing the stereotypical apples and oranges. It’s a very different world in many ways. The country is a far more diverse place than it was thirty or forty years ago. Some of today’s young workers are the children of immigrant parents who earned very little. In an era of increasing globalization, jobs have been outsourced overseas and technology has made others obsolete. Four-year college degrees can’t always keep ahead of the curve in a fast moving world.

But all these change notwithstanding, by most standards, the millennials are struggling. And that struggle is clearly illustrated in the housing market. To save money, many underemployed young workers are still living with family. Others are sharing dwellings – and rent – with friends.

Of those twenty and thirtysomethings on their own, though, an overwhelming majority is renting dwellings that range from apartments to houses. Citing money concerns and lifestyles, they’re choosing to get married later and postpone having children. And unstable employment situations mean they might need to move to another city for work.

Along with millennial attitudes toward home buying, the housing landscape has changed dramatically since their parents’ day. The housing collapse and the recession that followed brought tighter standards for getting a mortgage, including higher down payments and credit scores. That made it more difficult for young workers with unstable employment to even qualify for a home loan.

Because those standards were actually preventing people from getting loans and buying homes, they’ve relaxed somewhat. The government has asked the Fair Isaac Corporation, purveyors of the famed FICO credit scoring system, to loosen their standards. And amendments to the Qualified Mortgage Rule that took effect in i2014 have relaxed the down payment requirements for some kinds of loans.

Those changes don’t seem to have affected millennials’ interest in home buying much. Another trend might: the surge in rents in many markets around the country. A recent study by online real estate giant Zillow found that on average, renters pay twice as much per month for housing than homeowners. Some industry watchers speculate that the sheer cost of renting could push millennials with the ability to make a down payment to take the plunge into homeownership.

But that depends on factors that, for now, seem to elude the grasp of many in this youngest generation of workers still struggling to find and keep well paying jobs. While their parents may have been able to opt in to the American dream of homeownership at a similar age, today’s millennials are postponing it, perhaps indefinitely.

As Jason Hartman says, though, everyone needs a place to live. And that means long term returns for the income property investors able to provide those places for the “renter” generation that continues to lag behind its elders in every economic way. (Featured image:Flickr/rutio)