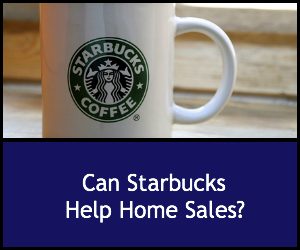 At one time, Starbucks’ company goal was to have one of their high-end coffee outlets on every street corner, so that no one would have to travel more than a block for a venti latte. That hasn’t happened – but in neighborhoods across the country, the ubiquitous – and often maligned – coffee giant is making its presence known in a surprising way: by boosting property values.

Real estate information giant Zillow collects information on real estate trends and crunches numbers to come to some surprising conclusions. Now, as a recent Newser article reports, Zillow has examined what happens to real estate when a Starbucks is in the vicinity. Turns out, homes within close proximity (about a half-mile or so) to a Starbucks are worth more than those farther away.

Starbucks’ reputation hinges on affordable luxury. It offers more than just a vast array of drinks and pastries. Even small Starbucks locations offer a place to sit and chat, work on the computer, do business. It conveys a sense of upscale comfort and security that touches the entire neighborhood.

The “halo effect” from a Starbucks outlet is only one of many, often subtle, factors that make a property appear more desirable. Zillow also found that street names can also help (or harm) a home’s desirability, with descriptors like “Way,” “Circle” or “Drive” sounding more appealing than the simple and boring “Street” or “Avenue.”

Similarly, homes with names, such as “Hunter House,” have higher cachet with buyers – and sell for more. Long reserved for high-end mansions or the homes of royalty, names can be given by any owner, and immediately makes the house seem more upscale and valuable.

The mere presence of a Starbucks tells a prospective buyer – or renter – much about a neighborhood. The company places its outlets in affluent areas or those headed toward improvement. Starbucks also tends to attract a well-defined clientele with shared values, income levels and education. Though people of all walks of life enjoy their coffees, teas and other high priced drinks, Starbucks aficionados tend to be urban, affluent and educated. Starbucks outlets don’t exist in a vacuum either. They’re generally in a location that’s supported by other high-end shops or boutiques, with employers able to maintain a more upscale workforce.

Homebuyers may associate the presence of a Starbucks with a lower rate of crime and more stability in the neighborhood, too – factors which make homes in those areas more desirable. The Starbucks effect appears to work in a radius of about a quarter of a mile, with home prices dropping incrementally the farther out of the magic inner circle they fall.

Does the same effect happen in areas with other kinds of specialty shops? The folks at Zillow checked for a similar phenomenon in areas near a Dunkin Donuts. And although homes did appreciate adjacent to the doughnut shop, increases were far lower than for homes near Starbucks. The reason? Dunkin Donuts, often associated with blue-collar workers and off duty cops, just may not have the same aura of upscale trendiness as Starbucks does.

The takeaway for investors following Jason Hartman’s recommendations for building wealth from income property? Location does matter – and so does a willingness to diversify into markets that offer the best return. Those are usually mid-size markets with a thriving economy and the promise of growth. Rental properties in those areas attract stable tenants able to keep pace with market-wide trends in rents. For income property investors, new opportunities may be as close as the neighborhood Starbucks. (Featured image: Flickr/rudolfschuba)

Seamons, Kate. “What a Starbucks Does to the Neighborhood.” Newser. newser.com 29 Jan 2015