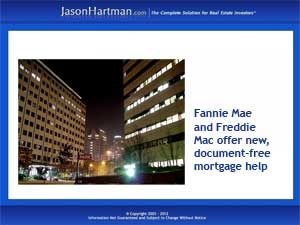 Even though indications are that the housing market is looking up after the disastrous crash a few years ago, the mortgage lending industry is still digging itself out of some very deep holes. Among the numerous problems facing major lenders both private and federal is the lingering issue of delinquent borrowers, whose defaults on mortgage loans mans losses for loan servicers. That’s why federal lenders Fannie Mae and Freddie Mac are courting struggling mortgage holders with a new bailout called “streamlined modification.”

The housing crash of 2008 or so left millions of homeowners in default and facing foreclosure. Some got rid of their properties through quick “short sales” that left them with far less than the property was worth. Others simply walked away from the deal – the so-called “strategic defaulters.” And some – the “underwater” homeowners – continued to struggle on, making payments but barely, and running late on payments.

As part of the cleanup after the collapse, major banks faced with charges of fraudulent practices and others in the mortgage lending industry rolled out numerous homeowner bailout programs such as refinancing, payment vacations and other options designed to reduce payments and help these homeowners keep their houses – and their mortgages.

The latest of these is the streamlined modification – a program scheduled to start on July 1 2013 but already being offered to desperate homeowners whose loans are owned by federal lending giants Fannie Mae or Freddie Mac. Streamlined modification is so streamlined that borrowers hoping to take advantage of its options don’t even have to provide documentation in order to get help.

The program is aimed at homeowners delinquent on their mortgages for at least 90 but less than 720 days. It’s being offered through Fannie and Freddie as well as a variety of secondary servicers of loans they own. Under terms of the program, a borrower is given a trial period of three months to make the lower payments offered by the lender. If they successfully complete the three-month trial with all payments made on time, then those new terms take effect for the life of the mortgage.

The Streamlined Modification is a variation of Freddie Mac’s Standard Modification, a program which has been in place for a while and strives to reduce delinquency through renegotiating payment options and schedules with struggling borrowers. But those applying for relief under the new program don’t have to provide documentation of their situation or wait for that kind of paperwork to be processed.

The goal, say Fannie Mae and Freddie Mac representatives, is to boost the housing recovery by keeping mortgage relief moving along and reducing the number of homes landing on the market through foreclosure— a process that can be costly in terms of lost revenue and the expenses of foreclosure processing.

Whether programs like Streamlined Modification actually stimulate the housing recovery remains to be seen. But for investors applying Jason Hartman’s recommendations for investing in income property, the interplay between lender and borrower offers important clues about the future.  (Top image:Flickr/gorfor)

Dinosaur Degrees: Are Four-Year Colleges Worth It?

Mortgage Brokers — Another Kind of Scam?