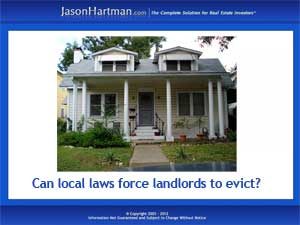 In a previous post we brought you news of the growing trend of nuisance ordinances and “landlord 911” laws being enact4ed by communities nationwide in an effort to curb neighborhood crime – and how those laws force landlords into taking on additional burdens, including the job of law enforcement on their properties. One of those costly and problematic burdens is the forced eviction.

In many neighborhoods around the country, resident have cast a wary eye on rental housing. Homeowners dislike the transient nature of tenants and don’t trust landlords maintaining investment property to keep up the standards of he neighborhood. Because of that association of rental housing and undesirable elements – along with entirely legitimate incidents confirming their fears – communities in cities large and small have been quick to enact some version of the nuisance ordinance, which aims to control neighborhood crime ranging from the minor to the major.

Ordinances that target rental housing place the burden of enforcement on the landlord/ipwner – allowing local law enforcement to “outsource” some of their obligations by requiring the landlord to oatrol the property and report criminal activity, whether it involves tenants, their guests, or trespassers.

Depending on the community, landlords can face stiff penalties for failing to comply. These range from suspension of permits to fines and even criminal charges. Not only that, under some versions of these laws, landlords must evict problem tenants in order to stay in compliance.

In many communities, nuisance ordinances that target rental housing come with a “three strikes” clause that mandates eviction after three incidents of criminal activity involving a tannest. The problem, as the latest legal challenge to these laws points out, is that the law cuts both ways, penalizing both tenants who commit or condone crime, and crime victims trying to get police help.

And the outcome for landlords is the cost and difficulty of initiating an eviction proceeding – a process that can take months and creates conditions for anger, hostility and property damage. Landlord-tenant laws allow tenants to challenge evictions in court and even countersue landlords pressing the case.

Depending on the provisions of a particular ordinance, landlords who don’t press for evictions can be held liable for the outcome, if more criminal activity occurs on the premises as a result.

Proponents of this kind of ordinance claim that to clean up crime on rental property, the buck stops with the property owner. But critics point out that nuisance ordinances force landlords to become cops – and that they relieve local law enforcement of their responsibility to keep neighborhoods safe. What’s more, the law can force landlords to evict good tenants who became crime victims themselves.

Landlords – and tenants – want crime free neighborhoods too. But these wide-ranging ordinances can create unintended consequences for both sides. It’s wise for investors in income property to heed Jason Hartman’s advice to get educated about local ordinances and neighborhood conditions that can create unexpected liabilities.  (Top image: Flickr/GoldBeach)