Is the Government Out to Punish the Big Banks? 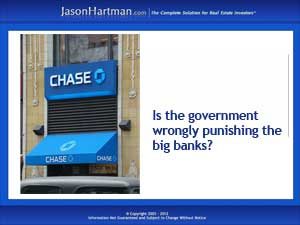 Last week, JP Morgan Chase settled its latest lawsuit with the US Department of Justice to the tune of $18 billion. That’s the largest single settlement ever concluded for an individual American corporation, and that makes some industry watchers wonder whether the government is simply out to punish the big lenders.

The Chase settlement joins a long list of recent outcomes to lawsuits pressed by the Justice Department and other entities against the country’s biggest banks for a variety of civil and criminal charges. The case against Chase, like many of the other suits against the bank and its cohorts including Bank of America and Citigroup, involves “misrepresentations’ made to bank customers and other investors. much of which stems from the 2008 housing collapse and its aftermath of massive foreclosures and fraudulent lending practices.

The lawsuits, many of which are still pending, and their outcomes have had an array of consequences, including legislation aimed at protecting consumers from fraud and misrepresentation, and tighter standards for issuing loans, with penalties for instructions that persist in underwriting risky loan products.

Consumer advocates and financial experts have welcomed the victories as a step forward in cleaning up the banking industry and holding lenders to tighter standards. The continued legal actions expose fraudulent practices on both the domestic and international fronts and demonstrate that even for these giant financial entities, illegal actions have consequences. The outcomes, they say, create a healthier and safer lending industry, with more long-term stability for borrowers.

But not everyone agrees. In a recent interview with The Daily Ticker, Chris Whalen, an executive Vice President of Carrington Holdings, claims that the new legislation and tighter oversight on banking institutions  may actually have the opposite effect – chilling the creation of credit and stalling economic growth.

The reasons, according to Whalen, lie in the toxic combination of the Federal Reserve’s stimulus plan, which keeps interest rates artificially low, and the far more stringent regulatory environment for lenders, which forces them to impose much tighter standards on loan applicants and actually reduces the number of loans granted.

Under those circumstances, say Whalen and others, consumer credit becomes scarce and economic growth grinds to a halt – precisely the opposite effect from what the government intended with its relentless pursuit of the big banks and its efforts to clean up the banking industry and mortgage lending in particular.

Industry watchers point out that these dire predictions have yet to manifest, and that it’s essential to establish safeguards around an industry that. when largely unregulated, was responsible for the housing industry bubble and crash in 2008 as well as a string of clearly illegal and fraudulent actions at home and abroad in the years following. They argue that to give the big banks a pass on criminal behavior places consumers at risk and encourages abuses.

Chase’s legal woes are far from over. Like its compatriot Bank of America, Chase still faces criminal charges in another suit. And for consumers, the government’s efforts to “punish” the big banks may create the kind of safe lending environment that lets investors build wealth with income property as Jason Hartman recommends.  (Top image: Flickr/rieh)

Fisk, Aaron. “Uncle Sam’s Need to “Punish” Banks Will Have A Chilling Effect on the Economy: Whalen. The Daily Ticker. 18 Nov 2013

Home Loan From the Family Bank