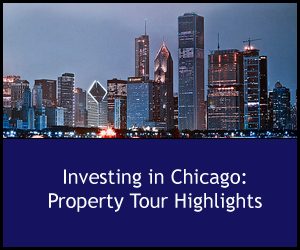 Listeners of the Creating Wealth Show know that Jason Hartman’s Chicago-area investment property tour took place July 15-17, 2015. The tour was a semi-private affair, bringing together Jason, investment counselor Fernando, local providers and a select group of clients for an overview of opportunities for investing  Chicago, Grand Rapids and even Detroit.

In episode 544 of the Creating Wealth show, Jason and Fernando offer highlights and insights from three days of touring, dining and discussion about income property opportunities in these three quite different cities.

First top on the tour: Chicago, a big city with a global reputation and much to like about its investing landscape. Here tour participants met with local providers both large and small, each with something to offer the investor hoping to start building a portfolio.

Reducing tenant turnover is key to building wealth in residential real estate, and those rates are very different in apartment houses as opposed to single-family homes. It’s an important point to consider when deciding whether to invest in multi or single-family dwellings – or to include both in a portfolio.

Asked about vacancy rates in apartments and single family dwellings, a representative of one of Chicago’s large providers told the group that tenants in apartments stay on average 1.5 years – an impressive length of time in a situation where turnover is typically very high.

The rate for single-family homes, on the other hand, averages close to 4 years. And that, as Jason points out, is a key reason for putting investment dollars into single-family dwellings. Coping with turnover can be expensive: costs include rehabbing and renovating vacated units, advertising for new tenants and preparing leases. Because renters in single-family homes generally stay much longer, those costs drop considerably.

Because apartment dwellers tend to be more transient, apartment investments often require more attention than single-family homes, which are a proven investment that offer better appreciation and overall tenant quality.

The second stop on the July property tour was Grand Rapids, a city that, as Jason points out, may have special appeal for those investors with a self directed IRA, foreign nationals, those with more than 10 properties and anyone who faces problems getting financing.

The reason? Land contracts, a property financing option in which the buyer makes payments for real estate directly to the property seller, rather than borrowing money fro a bank as in a traditional mortgage.

That opens up new opportunities for investor who might face obstacles to getting a standard mortgage. And, as Jason observes, the rate of return can go up dramatically with this kind of arrangement.

The last stop on the tour was an optional trip to depressed, deserted Detroit – a city whose population has dropped by half as manufacturing jobs dried up and bad decisions on the part of local government ensured that the city would keep spiraling down, with little hope of recovery.

There issn’t much by way of investing opportunities in Detroit, and Jason points out that the city’s plight illustrates a bad scenario for investors, where investing success or lack thereof is determined by factors beyond an investor’s control. Many people are leaving Detroit, but few are moving into the city, and the job base continues to erode.

The Chicago area has much to offer investors. A number of providers large and small are available to help meet each investor’s unique goals – and so is Jason’s own group pf experienced investment counselors.  (Featured image:Flickr/TonyWebster)