Interest Rates Stay Low: What’s Up with That? 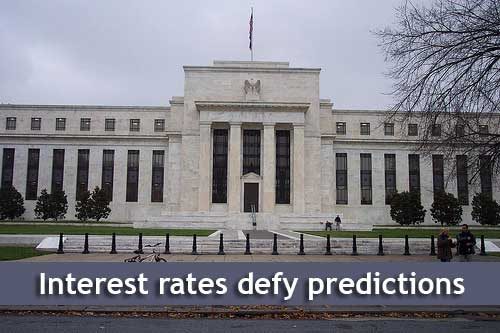 A year ago this time, interest rates, particularly for mortgages, were expected to take a major leap, thanks to the Federal Reserve’s announcement that it would begin to taper down its debt buying stimulus plan around the start of 2014. But, surprisingly, those rates have gone down, not up.

Interest rates for the typical 30-year fixed rate home mortgage of the kind Jason Hartman recommends to income property investors are still hovering below 4.5 percent. That’s maybe not quite as low as those historic rates of a couple of years ago. But industry watchers had predicted a much bigger jump following Fed’s decision to scale back the stimulus.

And scale back it has. Qualitative Easing 2, its plan to boost the economy by buying up billions of dollars worth of mortgage backed securities, was intended to push banks to keep rates low, thereby encouraging people to take out loans, which they’d then use to buy things, in a chain reaction that was supposed to benefit not just the struggling housing market but also the economy as a whole.

Though critics worried that the stimulus was really only benefiting the banking industry, its impact was clear: rates stayed low and big ticket purchasing, primarily housing, went up. And that’s why news of its draw-down sent jitters through the financial world.

The Fed is now on its third round of scaling back, paring another $10 billion off its budget every time – a move that triggered speculation that rats would bounce up as natural market forces took over. But halfway through 2014, that still hasn’t happened.

According to a recent report from Interest.com, the reason for the continued low rates has little to do with the Federal Reserve, and much more to do with a dip in the numbers of people applying for mortgages or refinancing plans.

New rules put in place at the start of the year make it harder to qualify for most kinds of loans, and fewer homeowners are opting to refinance than a few years ago, when the housing market was rebounding after its historic collapse. But as the year progresses, lenders are easing up on credit score requirements and actively courting buyers with faster turn around times and quicker approvals

The reasons behind today’s low interest rates are complex, and that picture is subject to change. But for now, those expectation defying rates are creating new opportunities for smart investors to begin building wealth.  (Top image: Flickr/cooperweb)

Invest With the Head, Not the Heart