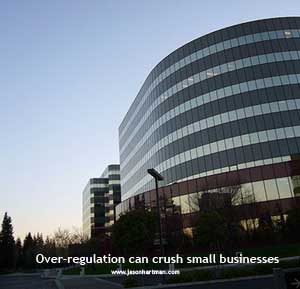 How did hummus – that lowly spread made of chickpeas and tahini – become the poster child for regulations that put a stranglehold on innovation and entrepreneurship? The recent tiff between Sabra, a leading maker of hummus, and a few purveyors of variations on the theme have a lot to show us about the drive of big players in business and finance to crush their up and coming competitors with too much regulation.

The story is simple. Sabra, makers of several varieties of hummus, filed suit against a number of competitors including Trader Joe’s to protect the purity of hummus everywhere. Why’s that? According to Sabra, hummus, in order to be called hummus, has to have certain proportions of specific ingredients, chief of which are chickpeas and tahini, a Middle Eastern sesame paste. Although you can add other ingredients like peppers and garlic, hummus just isn’t hummus without chickpeas and tahini.

Enter Trader Joes and a variety of smaller hummus brands with offerings like edamame hummus, which uses soybeans instead of chickpeas, white bean hummus (whose main ingredient is obvious) and hummus without tahini.

Sabra’s legal challenge to these upstarts consists of requesting regulations that specify what hummus can and can’t be, with controls on what products can use the generic term “hummus.” This has the intended effect of shutting own those competitor’s’ products or forcing them to use names that are unfamiliar to buyers and cut out their share of the lucrative hummus market worldwide. End result? More business for Sabra’s hummus products.

As Jason Hartman observes, the standoff has echoes of a much larger conflict: the tightening of regulatory oversight in areas ranging from tech startups to small banks trying to function n the shadow of larger, predatory ones. Request for more end tighter regulation of these ad other industries by established players in the field pose legitimate threats to the new kids on the block.

That’s a scenario being played out in the nation’s banking industry, as more and more new regulations designed to keep a tight rein on the bigger banks may be overburdening smaller financial institutions, forcing them to either scale back or shut down. It’s also present in the efforts of major utility companies to take aim at solar energy providers by getting local and federal governments to enact new regulations on who and what can be an energy provider.

You may never eat a bite of hummus. And on the face of it, Sabra’s efforts to preserve the purity of the product may seem a little silly. But its efforts to squeeze out competition through regulation is a scenario played out across the country in many fields, where larger corporations and institutions re trying to regulate their competitors out of business. (Top image:Flickr/rieh)