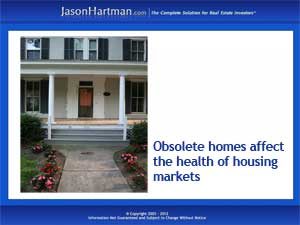 We expect computers, televisions and other kinds of devices to become obsolete. But what about houses? It turns out that the problem of “functional obsolescence” may be haunting the housing recovery, as potential buyers – and renters – are put off by homes that don’t live up to modern standards of appearance and usability.

Functional obsolescence refers to a product’s “shelf life” – the period of time when it’s viable, useful and desirable. Products fall into obsolescence largely because of design defects or features that make them fall out of sync with current expectations and needs. The pattern is easy to see in the case of electronics and automobiles – and now market watchers are blaming obsolescence as a factor in the recent slowdown of the emerging housing recovery.

Obsolescence in real estate takes several forms – and they all compromise a property’s value. Poor upkeep, a run down appearance and even junk in the yard might be considered obsolescence since that kind of property doesn’t conform to the expectations of current homeowners – and they drag down the values of homes all around them.

Other forms of obsolescence that make a home less desirable to current buyers involve features of a home’s construction or location that speak to the needs of an earlier time. Case in point: an older home with outside hookups for washers and dryers, or odd features such as an “orphan” bathroom or closet in an unexpected place.

Location can contribute to obsolescence too. Once upon a time, it was a good thing to have a home located close to a major thoroughfare, or with easy access to things like bus stops. Nowadays that kind of location is far less desirable – and stands to make the property less saleable.

The presence of obsolete homes is affecting housing markets around the country, as would be buyers are rejecting those older dwellings, many of which may be the product of foreclosure actions stemming from the great housing collapse of a few years ago. And that also means that although there seems to be an adequate supply of homes for sale in a given area, at the same time, there may be a significant shortage of “desirable” homes – thanks to buyers’ reluctance to purchase homes with even the faintest whiff of obsolescence.

The takeaway for investors? As Jason Hartman advises, do your homework and know your limits. An older home worth upgrading could be the investment of a lifetime – or a failure. Since the same issues that put off buyers could also be a deal breaker for renters, it’s important to do the math and consider the future – before obsolescence takes its toll. (Top image:Flickr/ardyll)

Why so Few New Mortgages?