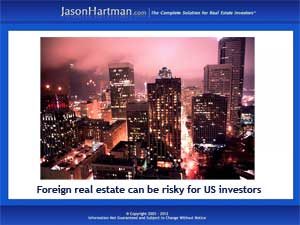 As more Americans are choosing to spend their post-retirement lives abroad, investing in foreign real estate can look like an attractive option. But while buying investment properties in some of the world’s hottest markets can work smoothly, as Jason Hartman says, putting investment dollars into tried and true US markets is still the most reliable route to building wealth.

It’s no secret that in some areas, such as emerging Latin American and Asian countries, properties are cheap and renters – often American expatriates – are looking for houses. And we know that diversifying is a smart strategy. But foreign real estate can be an iffy proposition for a number of key reasons.

In many developing countries where real estate is easily (and cheaply) available, modern infrastructure exists mainly in larger cities. That means property owners outside those areas may find themselves virtually on their own for maintenance, repairs and emergency situations.

US real estate professionals are licensed and accountable to standards set by professional organizations and laws governing real estate transactions, but that may not be true in other places where regulations are loose and it’s customary to “grease palms” to make a transaction work. Foreigners may be prime targets for frauds and scams involving properties whose ownership is hard to trace.

In the US, anyone from anywhere can buy property under the same conditions as American citizens. That’s one reason US real estate is so attractive to foreign investors. But that’s not necessarily true in other countries, which may impose additional regulations and expectations on foreign buyers, especially those trying to get mortgages or other kinds of loans from local banks.

The world is a volatile place. While US political systems and government institutions have their problems, the overall government and its currency are reliably stable. That’s not always true in other locations, where political shakeups throw the country’s governing systems into chaos and send currency values spiraling. That kind of instability puts investments at risk and leaves investors vulnerable.

If a foreign property deal goes bad, or an investor falls victim to fraud, it can be hard to recover losses or take a case to court. Other protections may be lacking too, such as law enforcement or consumer support like the Better Business Bureau.

Investing in cheap property in a picturesque locale far from home can seem like a glamorous adventure. But foreign investors are flocking to the “boring” US real estate markets, and, as Jason Hartman advises, for long-term wealth building, homegrown investors should too.  (Top image:Flickr/denharsh)

It’s Time to Learn About the Self-Directed IRA