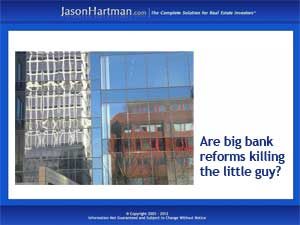 And then there were . . . none? The nation’s small banks and independent financial institutions seem to be disappearing at a rapid rate. While the demise of these regional and local banks may be nothing more than a blip on the financial industry’s radar, market watchers say the loss of the “little” banks harms consumers – and the massive new regulations of the Dodd Frank Act may be to blame.

As we’ve reported here before, the aftermath of the housing collapse of 2008 put the big banks – those deemed “too big to fail” – in the spotlight for a variety of bad banking practices ranging from wildly inappropriate mortgage loans to outright fraud. As more and more incidences of deceit such as the “robosigning” scandal and interest rate manipulation came to light, a string of lawsuits, many pressed by the US Department of Justice, followed.

These cases mostly ended in settlements, with banks like Bank of America, Citigroup and JP Morgan Chase paying millions to customers bitten by their bad practices. But another outcome was the creation of the Dodd Frank Wall Street Reform and Consumer Protection Act, popularly known as the Dodd Frank Act – a sweeping piece of legislation that imposes numerous new regulations and penalties on the financial industry.

The goal of Dodd Frank was to protect consumers from the kinds of manipulative and fraudulent practices that led to the housing crash, and to hold banks accountable for their behavior. Dodd Frank provisions included new standards for mortgage lending and new penalties for banks that ignored them.

The big banks, with masses of resources and legal teams at their disposal, absorbed the Dodd Frank changes with relative ease. They’re too big to fail, remember? So even with the extensive list of changes imposed by the Dodd Frank Act’s numerous new sub-acts and watchdog groups, for these megabanks business continues relatively unchanged.

But according to a new post from Money Morning, for smaller banks and financial groups, the slew of new regulations is becoming too much of a burden, one that’s crushing their ability to keep on doing business as usual. These small local banks don’t have the resources to stay in compliance and handle the consequences if they aren’t. New lending standards are limiting the number of new customers and these institutions are often too small to qualify for a bail out.

Many smaller regional banks have been absorbed in mergers with larger ones. Others have simply closed their doors. And, say financial experts, that’s closing the door to loan applicants and banking customers who may not be able to meet the standards imposed by larger banks, or who have special needs that a local bank could handle.

In the long run, the loss of the country’s small banks, credit unions and other kinds of financial institutions puts a dent in the recovery of the economy as a whole and limits options for investors who want to build wealth in real estates as Jason Hartman advises. And whether or not the well-meaning reforms of the Dodd Frank Act are entirely to blame, mortgage seekers of all kinds may feel the loss of the banks that are just small enough to fail. (Top image; Flickr/gorfor)

CW365:  Debunking Location and Opening the Books on Government Spending

Your Credit Score Is Not Voodoo