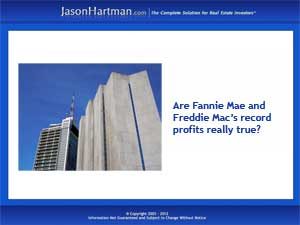 As new housing policy plans circulating in Washington plot the demise of Fannie Mae and Freddie Mac, the two mortgage lending giants are posting record profits. But according to a new report by the Federal Housing Finance Agency, which owns the two firms, those numbers may be skewed, as Fannie and Freddie drag their collective feet about writing off masses of the delinquent mortgages they own.

The fate of Fannie Mae and Freddie Mac has been in question since the housing collapse of 2008, when both agencies fell into bankruptcy after the subprime mortgage bubble burst. They were bailed out by the government and placed into conservatorship, but continued to underwrite loans – a lot of loans. Today, mortgages originated by these two companies account for over half of the home loans in the country, and their record profits have been hailed as a sign of a stronger housing recovery.

But part of the ongoing FHFA oversight, Fannie and Freddie are required to write off more of the delinquent mortgages that they own or back in order to conform with bank lending procedures, which call for writing off mortgages that are more than 180 days delinquent. Both agencies are putting off implementing this rule, and that move raises concerns about current numbers and also about how they account for future losses, since those delinquencies are missing from financial reports.

By stalling on writing off these delinquencies Fannie and Freddie are avoiding a bump in losses that would take a bite out of those record breaking profits they’ve been posting. And that also affects the amount they’re paying back to the government for the bailout money – which has already totaled $190 billion in dividends.

Currently, Fannie Mae and Freddie Mac hold off on writing off delinquent single-family home mortgage loans beyond the 180-day cutoff, and only do so if there’s a foreclosure. That allows some homeowners to seek an alternative such as refinancing or a short sale to avoid a complete collapse – and a total loss in revenue from the loan.

But all loans originated with either Fannie or Freddie must be backed by the government anyway, and that’s the real reason for their current high profits. Because that’s true, say FHFA representatives, it’s essential to impose stronger regulations on housing finance.

Fannie Mae and Freddie Mac have a peculiar status as lenders. They’re semi-government agencies in conservatorship, still paying back billions in bailout money while continuing to underwrite trillions in loans. That means that their fate is always linked to plans for housing policy reform.

And the fate of many holders of mortgagees either owned or backed by one of these agencies is affected, too. Fannie and Freddie are slated to implement the new policies at the start of 2015, if they survive that long – but until then, their reluctance to write off delinquent mortgages makes them a little more homeowner friendly than the banks. (Top image: Fickr/rutio)

Can a California Town Rock the Mortgage Industry?
5 Traits of Successful Investors