Can a California Town Rock the Mortgage Industry? 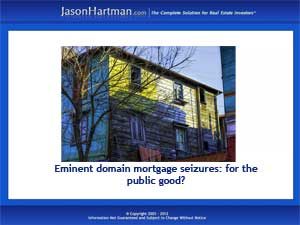 In a move reminiscent of feudal days, a California city is making a novel move on struggling homeowners that could affect the mortgage lending industry all over the country. In an effort to reduce the number of foreclosures in town, Richmond, CA is using its right of eminent domain to seize these “underwater” mortgages for the city.

In July 2013, Richmond (population just over 100,000) became the first city in the country to exercise its eminent domain rights to grab homes from homeowners in danger of foreclosure. Every state has the right of eminent domain – the power to seize private property for the public good. When a municipality exercises that right – say, in order to build needed infrastructure – the owner of the seized property is entitled to compensation at a fair market value.

The use of eminent domain to prevent foreclosures has very little legal precedent. The city of Richmond plans to refinance the mortgages itself, and the loss of mortgage revenue is what’s triggering lending industry outrage.

But city officials point out that over half of Richmond’s homeowners are underwater, which sets the stage for more foreclosures and defaults that can depress property values and derail efforts to get the local housing market back on track. They say that mortgage lenders haven’t stepped up enough to help these troubled homeowners, and seizing the homes was a last resort.

The process begins with a letter from the city to property owners and servicers of the troubled mortgages, offering to buy the loan for a price typically considerably less than the value of the home. If the offer is refused, the city then uses its right of eminent domain to seize the property outright.

Mortgage lenders claim that Richmond’s plan is unethical and potentially unconstitutional – and that it sets a dangerous precedent for any other municipality to follow. In the long term, they fear, eminent domain seizures like this could undermine the mortgage lending industry and jeopardize the housing recovery.

So far, Richmond is the only city taking this approach to solving the foreclosure problem – and it’s too early to call it a success. But since every state has its own right of eminent domain, the outcome could affect income property investments of the kind Jason Hartman recommends – and change the mortgage lending business forever.  (Tpp image: Flickr/jlasko)

Is Retirement Dead? The Rise of the Encore Career

It’s Been a Bad Week for Vladimir Putin