Is Retirement Dead? The Rise of the Encore Career 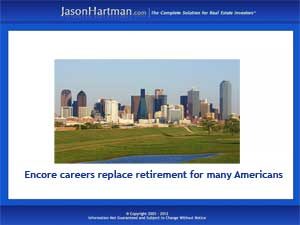 The “American Dream” of retirement – hang up the working clothes at 65 and hit the golf course – is becoming an impossible dream for many Americans who keep on working because they can’t afford to retire. But still others are choosing to delay or skip retirement altogether – and much to the dismay of those who long to take that extended vacation, scientists and economists alike are claiming that retirement just isn’t that good for you anyway.

As pension plans struggle and the cost of living goes up, more and more people are finding that spending their working lives to save money for another life of almost the same length is just impossible. They have to stay on the job or find another one just to stay afloat. “Hobby work” and volunteering aren’t an option.

But a surprising number of recent studies by researchers at institutions as varied as Johns Hopkins and the University of North Carolina have found that, like it or not, working longer may mean better health. Turns our that in study after study of people working into their seventies, eighties and beyond, rates of Alzheimer’s and other kinds of dementia were much lower, and levels of social engagement and overall well being were higher.

Individuals who worked –either at a conventional job or for themselves as consultants, entrepreneurs or freelancers – stayed independent longer, were more mobile and bounced back more quickly from traumatic life events than those who chose retirement in the traditional sense. And while this kind of study has fueled a bit of a backlash among those who want to retire but can’t, the research has also contributed to a new trend -the romance of post-retirement work.

Variously called the “encore career,” the “second act” or the “third age,” working after (or instead of) retirement is now being encouraged as a way to engage passions, be creative and forge new beginnings. And while that may seem like simply making a virtue out of necessity to those who have to drudge along just to pay the bills, midlife new starts account for over two thirds of startup companies and self-employment ventures.

For many of these “non-retirees,” investing in income property and donning the hat of the landlord-entrepreneur can combine the best of several worlds: flexibility, autonomy and multiple options for an income stream without having to deal with ageism and competition in he workplace.

Retirement as we know it may be on the way out – and rightly so if new research is correct. That remains to be seen – but as more and more Americans face the second or third age – or beyond – with only they to rely on, investing in income property, as Jason Hartman says, might just be the “encore” they’ve been looking for  (Top image: Flickr/VoxEfx)

Home Office Deductions: Get What’s Coming To You