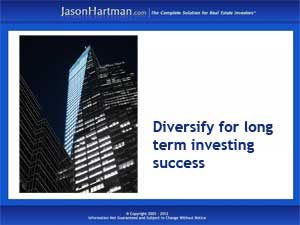 There’s much talk in financial and economic circles about the “US housing market.” But in any ways, there’s really no such thing. While it’s possible to talk about general trends that characterize the behavior of the housing industry as a whole, all real estate really is local – and markets behave differently in various areas of the country. That’s why smart investors obey Jason Hartman’s commandment to be an “area agnostic” – willing to diversify holdings in different markets for maximum returns. And recognizing the characteristics of various markets is a key first step.

Financial experts and housing market watchers frequently say that real estate markets are cyclical – and that cycle is pretty predictable, running its course over a period of years. According to this view, a housing market track a trajectory that takes it from collapse to recovery and back again.

The great housing collapse of 2008 offers a graphic illustration of how a market cycle works on a grand scale. Thanks to spiraling prices and easy loans, housing in most areas of the country was booming. But after the boom came the bust, when subprime mortgage holders defaulted by the millions and the nation’s big banks were caught red handed in a variety of fraudulent and illegal practices.

After that came the next phase of a typical cycle: correction, when regulators and other government and private bodies attempt to address the causes of the crash. That’s followed by a period of stabilization, when the dust settles and recovery can begin. After recovery comes revival, and as prices rise, and interest rates go up, conditions are ripe for a crash, which means lower prices and more affordable housing for more buyers – and the cycle begins again.

But that kind of cycle isn’t the only pattern home sales can follow. Housing in some areas takes a more linear path, in which housing prices increase slowly and steadily over time, in a stable market where conditions don’t change much. These are the “boring” markets where home prices are generally moderate. That’s where an investor is more likely to see a positive cash flow from investment properties than in those market where housing prices are high and rents may not cover mortgages.

During the housing collapse of a few years ago, these patterns played out on the national stage – and allowed pundits to speak of the US housing market as a whole. But for investors, it’s important to look at the characteristics of local and regional markets individually, since they’re affected by many unique factors related to the local economy, employment and even climate.

Because of all these variables, diversifying investments over as broad an area as possible is the best way to keep income flowing. What’s up in one area may be down in another – ad the slow but steady linear markets back up the riskier ones. Knowing how the cycles and lines of real estate work on scales small and large can help investors make smart choices for building wealth. (Top image:Flickr/boscdanjou)