Credit Cards? Not for Everybody 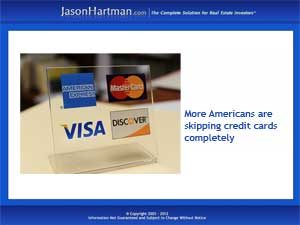 Is plastic a thing of the past? After the economic shakeups of the last few years, new financial realities may be changing traditional patterns of managing money and handling debt. And for many Americans, that means rethinking their relationship to credit.

A new article posted by CNN Money notes that overall, personal debt appears to be declining among some groups. While that appears to indicate wiser money management and more prudent use of credit, the opposite is true: larger numbers of Americans, particularly millennials, are opting to skip getting credit cards altogether, preferring to use debit cards instead.

The spiraling debt load carried by new college grads has taken up much headline space recently, and along with that, financial experts are voicing concerns that these young consumers are racking up record levels of credit card debt for living expenses while in school. But new data suggest that among this group, the number of people who have no credit cards at all has doubled.

Other groups are forgoing cards, too. Minorities in some areas are also choosing debit and cash rather than cards, a trend that might reflect problems with qualifying for credit as well as cultural preferences for these other ways of doing business. Older Americans in some parts of the country typically choose checks and cash over cards, too. And those with ruined credit from foreclosures and other economic disasters who have hard time getting credit also resort to debit and other forms of non-credit payments.

In the overall picture of typical credit card use – and misuse—the uptick in pay as you go consumers may not seem like much. Or even a healthy sigh. But there’s a downside. In an economy that relies heavily on credit scores and credit management in aspects of daily living ranging from employment to housing, those with little or no credit history may find themselves locked out.

Credit cards – not debit — are required for transactions such as renting cars or booking hotels. A credit check may be part of an employment process. And for financing major purchases such as homes or cars, cash isn’t an option for most people. That creates the vicious cycle of needing credit to get credit, but without a credit history that may not be possible.

For that reason, financial advisers recommend building a credit history with a carefully managed card or two, if possible. Responsible use of credit goes a long way toward restoring a damaged credit history, too – and that opens the way to greater participation in the economy as a whole.

As Jason Hartman says, an investor’s credit score is as precious as gold, creating opportunities to build wealth without tapping into personal reserves. And that means that for those trying to avoid the bad debt of credit cards, the good debt of mortgages and other asset builder remains out of reach.  (Top image; Flickr/PhilipTaylorPT)
Source:
Ellis, Blake. “Young Americans Are Ditching Credit Cards.” CNNMoney. CNN.com 14 Jun 2013

Fannie Mae and Freddie Mac: Zombie Stocks on a Roll