Fannie Mae and Freddie Mac: Zombie Stocks on a Roll 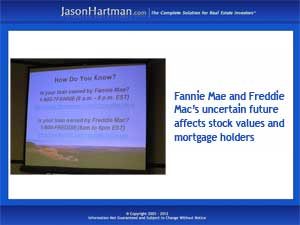 The rollercoaster ride of quasi-federal mortgage lending superagencies Fannie Mae and Freddie Mac hit the down slope after an unprecedented climb that saw stock prices for both these institutions gaining up to 150 percent in previous weeks. Now, as stocks fell by as much as 40% in the final week of May 2013, some industry watchers claim that these “zombie stocks” are hollow, backed by little more than promises.

According to a new analysis in The New York Times, the question isn’t what these stocks are trading for, it’s why they’re trading at all, given the troubled history of these agencies. Fannie and Freddie played a pivotal role in the great housing collapse of 2008, with massive losses in defaulted loans. But if the government had intervened with a total bailout the debt they carried –about $5 trillion – would have been added to the federal debt tally.

Instead, the Treasury Department opted to put both agencies into conservator ship – overseen by a regulator and repurposed as a kind of semi-public service institution that would help to prop up the housing market. But at the same time, Fannie Mae and Freddie Mac were also being run like private businesses, with lavishly compensated executives and a for-profit model.

The government’s long-term goal is to eliminate the two companies entirely and institute a completely new system of offering government backed mortgage loans. At the same time, though, it propped them up with almost $200 billion and asserted the right to acquire nearly 80 percent of their stock.

Industry watchers point out that these stocks really aren’t worth much –hence the term “zombie stocks.” Each company is in debt to the government. There is no shareholder vote and the stocks have been delisted by the New York Stock Exchange. Plus, they’re being sold by entities that are expressly targeted for elimination. Yet the stocks continue to trade strongly, popular among small investors and speculators.

The fate of Fannie Mae and Freddie Mac stock might remain only on the back pages of the financial news – but the two mortgage giants combined hold over half the mortgage loans granted to residential homeowners and independent investors. Many of these loans are serviced by other lenders, making it difficult for some mortgage holders to know whether their loan originated with either of these two agencies.

The fate of Fannie and Freddie’s stocks may not impact many outside the trading world, who ma find themselves empty handed once the government scrubs the two agencies. But thanks to government intervention Fannie and Freddie are inextricably tied to the housing market, and their future affects the outcomes for mortgage holders and mortgage seekers alike.

Fannie Mae and Freddie Mac are neither fish nor fowl – nominally government entities but in some ways highly privatized. For investors taking Jason Hartman’s advice to build wealth through mortgaged income properties, the fate of their zombie stocks may be well worth watching. (Top image: Flickr/DniBloomfield)

How Income Equality Can Be Good for Society, with Richard Epstein