Would You Buy a House With Bitcoin? 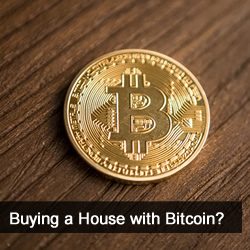 The Bitcoin has changed the way the world thinks about money, and its influence continues to grow. Since the first Bitcoin transaction took place 2009, the digital currency has been accepted by a steadily growing list of businesses, institutions and marketplaces – including real estate. And it’s a trend investors need to watch.

The Bitcoin was created in 2008 as an experiment in freeing financial transactions from the control of traditional institutions and regulations. Completely digital and totally unconnected with any kind of government agency or banking concern the Bitcoin promised to democratize money completely.

Developed out of a computer algorithm that dedicated geeks could use to ‘mine’ new coins, the Bitcoin can be used in any transaction two parties agree upon. There’s no way a government entity could interfere or track that transaction. Bitcoin can be bought and sold on several large exchanges operating around the world to make transactions of small and large amounts run smoothly.

From those early days, Bitcoin deals have gone mainstream. In world exchanges, Bitcoin stands alongside traditional currency heavy hitters such as the dollar, the euro and the yen, with values that fluctuate from lows of $20 to highs of over $200. Bitcoin can be used to buy cars, pay college tuition, build a website, get fertility treatments, travel – and now, buy and rent houses.

Bitcoin’s presence in the world’s real estate market has grown significantly since the creation of major Bitcoin exchanges that make it easier than ever to conduct business using the digital currency. It’s possible to buy and sell real estate entirely in Bitcoin – and even to pay your rent in Bitcoin too. To do this, all that’s necessary is two parties who agree to the deal.

Butcoin is especially attractive to investors who want to buy real estate in a foreign country. Most popular now in Asia, the use of Bitcoin in real estate transactions is spreading worldwide. The digital currency appeals to investors from countries whose official currencies are unstable or devalued, but Bitcoin transactions offer an upside – and some serious downsides as well – for investors everywhere.

Should you buy, sell, or even rent, investment property with Bitcoin? The very qualities that make the cybercurrency appealing also contribute to its iffy reputation among investors and money market watchers. The anonymity and lack of regulation over Bitcoin transactions made the digital currency a prime vehicle fro all kinds of illegal transactions, from drug dealing to money laundering. Many people are aware of Bitcoin’s connection to the online drug marketplace Silk Road, thanks to the widely publicized trial of its alleged founder in January 2015.

The Silk Road incident called attention to one of the main concerns about Bitcoin. Digital currency is independent of any issuing organization such as a country’s central bank or other large financial institution. While that keeps Bitcoin “free,” it also means that many of the safeguards surrounding traditional money just don’t apply.

In the US, the government can block certain transactions that break local or national laws. It can track transactions through bank accounts and other means. Using those paper trails it can prosecute suspected criminal activity – and compensate victims.

In a Bitcoin transaction, none of those safeguards apply – and if a deal goes sour, there may be little or no recourse for those involved. A recent case involving a Hong Kong based Bitcoin exchange resulted in the loss of over $300 million USD in a suspected Ponzi scheme – but investors had little recourse once the exchange closed its virtual doors.

The volatility of Bitcoin itself may also present some challenges for investors in big-ticket items like houses. Bitcoin trades in the international money markets like traditional currencies, and that means its value can fluctuate widely. The property you buy with Bitcoin today may sell for a drastically different amount later on.

On the other hand, though, Bitcoin-denominated transactions are fast and virtually effortless. With the click of a mouse funds flow from one party’s account to the other. And the lack of traditional governmental or financial oversights also means that your transaction isn’t taxed or subject to other regulator fees except those imposed by the exchange or marketplace itself.

Tax laws do affect Bitcoin, though. In the US, current tax law calls Bitcoin a tangible asset, like property, rather than money. So some Bitcoin experts recommend converting them back to traditional currency as soon as possible.

What if a tenant wants to pay rent in Bitcoin? Again, Bitcoin works when both parties agree to the exchange, so if a landlord and tenant elect to have that kind of arrangement, it could work – and does, in some areas. But as always, the safeguards offered by traditional currency don’t apply.

Bitcoin is here to stay, and its increasing acceptance means that more and more investors are likely to encounter the digital currency in real estate dealings. And that calls for staying informed, educating yourself and making careful investing decisions – as Jason Hartman always recommends. (Featured image:Flickr/btckeychain)
Source:

What You Earn For Life is Likely Set Before Age 30