What You Earn for Life is Likely Set Before Age 30 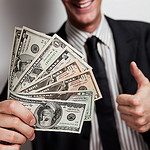 Newser – Those who like predicting how much they’ll have by the time they retire may want to peruse the Federal Reserve Bank of New York’s latest research. The bank’s report, which analyzed the careers of 5 million workers over four decades, found that it’s the first 10 years of a person’s time in the labor market that likely determine lifetime earnings, the Washington Post reports. Fatih Guvenen, one of the report’s authors, explains that entry-level workers start off at lower pay while they absorb new skills; once the learning curve is overcome, employers start to pony up more in their paychecks. But on average, that increase starts to fall flat after the initial spurt, with most of the growth taking place within those first 10 years—which may mean, as Akane Otani points out on Bloomberg, that “unless you’re a fantastic anomaly, you’ll probably see your last big raise well before you celebrate your 40th birthday.”

Workers set to take in the median lifetime amount will see a 38% pay boost from age 25 to 55, but most of that growth happens between 25 and 35. Meanwhile, workers in the 95thpercentile for earnings will experience a 230% earnings growth from age 25 to 55, while the top 1% (our doctors, lawyers, and so forth) will reap a 1,450% growth in the same period. The group that suffers most? The bottom fifth of earners, who suffer income declines in that same bracket due to often physically demanding jobs. “Low-skilled jobs tend to use brawn, not brain,” Guvenen says, as per thePost. “Brawn depreciates very quickly.” A snippet of schadenfreude, as pointed out by Bloomberg: The more money an individual makes now, the researchers say, “the more room he has to fall and the less room he has left to move up.”