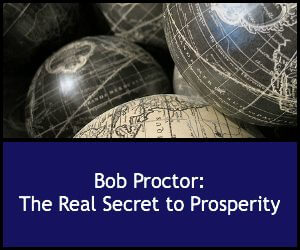 Can you think your way to prosperity? Not exactly – but that’s the first step, according to Bob Proctor. Dubbed “America’s Greatest Prosperity Teacher,” Proctor has spent 55 years helping people of all kinds to transform their lives and achieve their goals. In a recent appearance on the Creating Wealth Show, the longtime success coach and co founder of the Proctor Gallagher Institute spoke with host and real estate expert Jason Hartman of the Platinum Properties Investor Network about the secret behind The Secret  and how transforming thoughts can change reality and open doors to prosperity.

Although Proctor is the author of several books, the most recent of which is The ABCs of Success: the Essential Principles From America’s Greatest Prosperity Teacher, he prefers to focus on programs designed to help individuals find greater prosperity, happiness and purpose by accessing the tools we all have within, but rarely explore.

Proctor’s teachings about keys to achieving goals and aspirations – and the obstacles our own minds put in our way – are founded in creativity. “We all have creative tools we fail to implement and apply,” he says.

We need to use those tools to harness the mind’s power to think. As Proctor puts it, if we learn to control our thinking, we can understand the mind. And if we can do that, we can change our circumstances.

For Proctor, the main obstacle to personal transformation and achieving goals and dreams is the inability to control thoughts. We simply aren’t taught how to do it, he says. In fact, our school system actively tries to stifle the very faculties that contribute the most to creating a climate for achieving success.

Imagination, creative thinking, and a willingness to think outside the box are all hallmarks of the curios, ever exploring mind of children – but by the time children are sent to school, they’re discouraged from those non standard thought patterns. Adults need to rediscover that capacity or intuitive, creative thought in order to understand the mind and make major changes in thinking.

Just about every culture has some version of the notion that controlling thoughts means controlling reality – and that looking deep within opens the door to attaining long held desires. The key to making lasting change manifest in the world outside ourselves is to make changes in our conditioning within. But that takes effort, causes discomfort, and doesn’t happen overnight.

Breaking the Paradigms That Prison Us

Proctor tells Jason Hartman that we all have paradigms – a multitude of habits and behaviors dictated partially by genetics and partially by subconscious conditioning that begins at birth and shapes how we learn to view the world. But that’s beyond the real of conscious thought, so most of us spend our lives governed by the thought patterns and behaviors generated by the input we got in those early years.

But Proctor was different. Inspired by Napoleon Hill’s classic Think and Grow Rich, he began studying to find out why that’s true – and how to break those subconscious patterns. “Seek and ye shall find is pretty good advice,” he says.

Proctor credits the 2006 book and film The Secret for “waking the world up” to the basic ideas hat underlies his teachings. “The Secret” was the product of Rhonda Byrnes’ explorations into thought; creativity and manifestation that became a smash hit and introduced the world to the Law of Attraction. Byrnes herself was inspired by the 1910 book by Wallace D. Wattles, The Science of Getting Rich,  which launched her search for the core truth about how we manifest our desires.

The Secret revealed the secret, but Proctor points out, it led people to a major misunderstanding: that if you just think about something, it will manifest. That isn’t enough, according to Proctor. To manifest a goal takes three steps – and thinking is only one of them. Getting what you want also requires internalization – making that goal a part of yourself – and application, or doing things that move yourself in the direction of that goal.

All three steps will move your consciousness of that goal to a higher plane where, Proctor says, “it already exists.” Though it’s essential to control thoughts, thought alone won’t bring a goal into reality. Action will.

What if you understand Proctor’s concepts, but you just don’t know where to go from there? The key is in finding your purpose.

As Proctor puts it, we are all born to do something exceptional, and finding out what that is requires thought and patience. The key to finding purpose is to reflect on passions – what it is that you truly love to do. Doing that thing, then, is your purpose. And knowing that creates a framework for defining the goals that make the purpose manifest.

Proctor’s advice isn’t just theoretical. Practical tips for discovering purpose and making it manifest in the world include:

Transformation isn’t easy, Proctor cautions. It’s a lifelong process to recognize, understand and change imprisoning thoughts. But it can be done. And when you realize your purpose and bring your thoughts into alignment with that purpose, the stage is set for major change – and if you’re looking for a way to jumpstart your journey to prosperity,  doors  will open to achievements you never thought possible.   (Featured iamge: Flickr/davidjaheram)