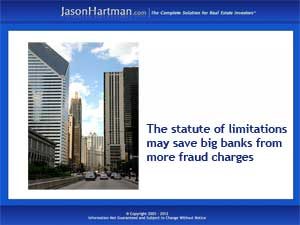 Sixty-six billion dollars and canting. That’s how much the nation’s big banks have spent in the last three years on litigation in cases stemming from the 2008 housing meltdown as well as charges of later misconduct. And that total is likely to climb as federal and civil prosecutors rush to file new cases – before the statute of limitations runs out.

According to a new report by CNN, it’s been nearly five years sine the start of the subprime mortgage collapse. And as that anniversary nears, the government is stepping up its efforts to get both civil and criminal complaints filed, since five years is the statute of limitations on some of the crimes involved.

The Obama administration has been accused of falling to do enough to help the victims or the housing collapse – mostly mortgage holders who lost their homes in fraudulent foreclosure cases. That’s one reason for the flurry of new cases.

Although a number of smaller institutions are also involved, it’s the nation’s biggest banks, including Bank of America, JP Morgan Chase, Citigroup and Wells Fargo, that are targeted by round after round of lawsuits and investigations. As we’ve reported in previous posts, Bank of America and Chase lead the pack, with an array of charges both old and new reflecting misconduct including the robosigning crisis of mortgage fraud, the LIBOR scandal of manipulation international interest standards, and Chase’s recent forays into bribery and tampering with energy markets

As pressure mounts to bring more charges to court, consumer advocates worry about the outcomes for victims of those fraudulent foreclosures, stalled refinancing cases and other illegal and unethical practices. It took two years for victims of the robosigning settlement to see their compensation checks – and then, some bounced and others were delayed or lost.

The majority of charges involve domestic mortgage issues, but others –including Bank of America’s LIBOR charges and new allegations against Chase – cross international boundaries. The scope of these investigations and the regular appearance of new charges suggest that there’s enough misconduct to keep the US Justice Department busy for a long while.

Will the legal costs break the big banks? Not likely. The nation’s six largest banks – the four we’ve mentioned here plus Goldman-Sachs and Morgan Stanley – earned a total of $207 billion in profits since 2010. And though the average banking customer may not notice a thing, the fact that new charges continue to roll out suggests that mortgage holders — including investors building wealth in income property as Jason Hartman recommends — may still be vulnerable to the kind of practices that paved the way for the collapse. (Top image: Flickr/gorforr)_

Jason Hartman is the complete solution for real estate investing.   Read more from our archives:

Are You Ready for “Septaper?”