Are You Ready for “Septaper”? 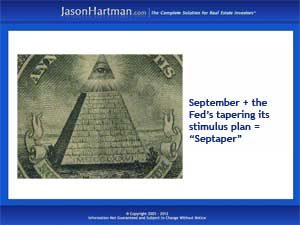 August is winding down, and investors and financial gurus – not to mention the little guys holding residential mortgages – are warily eyeing the advent of “Septaper.” the media’s dreadful new name for the Federal Reserve’s promised drawing down of its massive mortgage securities buyup plan.

Just a year ago, in September 2012, the Fed began buying billions of dollars’ worth of mortgage backed securities from lenders across the country in an effort to stimulate the housing recovery. The plan was to get more money back into the hands of lenders so that interest rates would stay low. And stay low they did – hovering at newly unprecedented levels for months and making home buying more attractive.

Since the early spring of 2013, Federal Reserve officials have been hinting that it might be time to taper off the buyup. But since the decision to do so hinges on the health of other economic indicators, the timetable continues to shift. Better housing and employment numbers meant a draw-down was near; slowing in these and other sectors suggested the economy still needed the boost from the buyup.

In July, though, as speculation swirled about the fate of Fed Chair Ben Bernanke and regional Fed officials worried about the lack of a clear direction on the securities plan, new reports set September 2013 as the time to start tapering off on the securities buyup. Hence the name “Septaper” coined by a media that brought us such hybrid monstrosities as “Brangelina.”

But as “Septaper” nears, market watchers and economists as well as everyday consumers are beginning to worry. Stock markets have been jittery ever since the Fed began talking about the tapering, and some financial experts predicted that once the stimulus is withdrawn, the same indicators that triggered it – the housing upswing and better job numbers – could crash.

Without the help of artificially low interest rates, they fear, rates would begin to climb back to levels naturally dictated by the markets, and that would slow housing purchases and stall consumer buying in other areas as well. And that could create the very conditions the stimulus plan meant to prevent.

In the meantime, though, financial experts say that now is the time to take on mortgages as well as other major loans. Because Septaper is coming – and this time – really really this time – the Fed will pull the plug on the program. Probably.  (Top image:FlickrSqueakyMarmot)