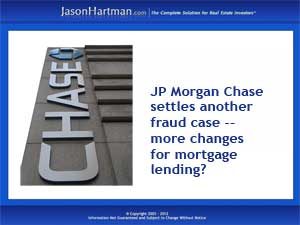 While Bank of America has been grabbing headlines lately as the poster child for problematic mortgage and securities transactions dating back to the housing crash of 2008 and before, JP Morgan Chase has been conducting it own legal battles on similar charges of misbehavior at home and abroad. A just-announced tentative settlement deal for $13 billion has put some of those cases to rest, but the bank may still faced criminal charges.

We’ve been following the progress of the bank fraud settlements for some time, with an eye to the outcome for mortgage-holders and mortgage seekers in a world of tighter oversight and regulation. And as new cases continue to be pressed and settled, more details emerge about the scope of fraudulent behavior that housing professionals say contributed heavily to the housing crash.

The much-publicized housing collapse was triggered by a bubble of home buying that was sustained by questionable loans made to unqualified buyers. The nation’s major lenders floated many of these subprime loans and then seized properties when mortgage holders fell into default. Many of those foreclosures, in their turn, were processed under highly questionable circumstances – many with fraudulent signatures and no oversight at all.

The culprits in these cases weren’t small local banks or credit unions. The nation’s biggest banks were implicated – Bank of America, Wells Fargo, and JP Morgan Chase among them. The attorneys general of most if not all states and the US Justice Department began pressing multiple fraud cases against these institutions in early 2010, with settlement after settlement rolling out as new evidence of malfeasance came to light.

While these investigations produced the expected outcome of guilt in instances like the massive “robosigning” scandal and other mortgage related fraud, they also turned up evidence of criminal behavior on an international scale. Bank of America, for example, was found to have illegally manipulated LIBOR rates for establishing worldwide interest rates. And now criminal charges may still be pending against JP Morgan Chase for sales of energy securities to investors abroad and at home.

What do the new settlement deals and pending charges against JP Morgan Chase and other major banks mean for investors hoping to build wealth in income property, as Jason Hartman recommends? As cases are settled, checks are going out to victims of fraudulent foreclosures and other actions – but for many, it’s far too late: houses were lost to foreclosure and never recovered. Some of those homes still remain in the foreclosure pipeline, or lost in the “shadow inventory” of foreclosed properties that still haven’t made it to market.

The most significant outcome of banks’ bad behavior, though, is the changes made to the mortgage lending process itself. The Dodd-Frank Act, for example, instituted new regulations aimed at protecting borrowers and creating better accountability for lending institutions. Related changes including the Qualified Mortgage Rule make it harder for unqualified applicants to get loans and penalize lenders for making riskier ones. That creates a tighter lending environment for residential and investment borrowers alike.

More charges for actions old and new may be coming for Chase and its cohorts, as the Justice Department and other bodies continue investigating. And more legislation aimed at forcing these banking giants into accountability could follow. For investors, a cleaner mortgage lending environment could open doors to new opportunities.  (Top image:Flickr/cooperweb)

What Does the Dollar’s Decline Mean for Investing?