What Does the Dollar’s Decline Mean for Investing? 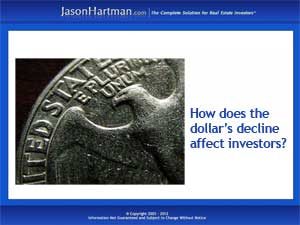 When the government shutdown ended, the value of the US dollar stood at its lowest point in about eight months, with some experts predicting it could fall even lower in the coming weeks. As China calls for a “de-Americanization” of the global financial world, what does the decline of he dollar mean for investing at home?

Backed by the US Treasury, the dollar has set the standard in modern times as the key reserve currency, making the US the leading global financial power. Around the world, US Treasury bonds and other securities backed by the Treasury lead the way in supporting value. And that makes those instruments the “go-to” method of exchange for countries and private investors around the globe.

But the recent turmoil in Washington that led to the 16-day shutdown and fights over keeping or raising the debt limit seems to have shaken the world’s confidence in the dollar as a stable reserve currency. Other currencies are surging, including China’s. And that’s why China, along with other Asian countries, are raising the point that it may be time to retire the dollar as the backbone of world financial reserves.

Back in the US, too, the aftermath of the shutdown has economists and financial experts worried about a looming recession, as the dollar’s buying power weakens, along with consumer confidence. That’s one reason the Federal Reserve opted to keep its stimulus program going into the foreseeable future, with speculation that it will last at least through 2014.

Some economists argue that the stimulus plan may actually be bad for the dollar, since it’s keeping interest rates artificially low and making lending possible on a scale that’s not actually backed by the markets. But with concerns about the damage the shutdown and the debt crisis might do to an economy still struggling to recover, the stimulus is expected to keep the housing recovery afloat – and with it, other areas of the economy such as employment.

For now, talk of finding an alternative reserve currency in case the dollar really tanks is just that – talk. But it points up the worries caused by the dollar’s apparent vulnerability in world markets. More concerns loom as the Federal Reserve changes hands in 2014. But in the short term, a debt crisis has been averted, allowing the country to keep borrowing.

So far, the money turmoil hasn’t had a measurable impact on housing prices or availability in the housing market as a whole, though consumer purchasing in general remains jittery. And though they’re beginning to rise, interest rates remain relatively low, thanks to the Fed’s continued backing of its stimulus plan. While the dollar finds its fate in the world market, it’s a good time for investors to take Jason Hartman’s advice to stay informed – and diversify for the best return in these uncertain financial times.  (Top image: Flickr/SqueakyMarmot)

When (and Why) to Teach Kids About Money