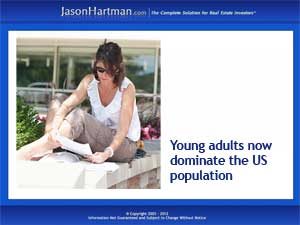 For decades that group of people born between 1946 and 1960 or so have bee the biggest single group in the US, the subject of endless study by everyone from psychologists to advertising directors. But new statistics show that their status as the biggest subset of the population is being challenged by those in their early twenties. And that may be good news for income property investors.

According to a recent New York Times article, the latest Census Bureau statistics show that the biggest age group in the US is just 23 years old. And that’s followed closely by those a year or two older and younger – an increase that’s accompanied by a gradual decline in the numbers of baby boomers.

Who are these twentysomethings – and where do they fit in the traditional scheme of American life? They’re tech-savvy, less attached to traditional lifestyles, more idealistic and at the same time more cynical than their elders – and they’re not interested in key aspects of the “American Dream.’

Because many members of this generation are either in college or just graduated, they’re likely to e carrying a pretty heavy load of student debt. They’re probably still searching for a job in their field or serving an internship. Some are in the early stages of a career path.

What they’re not doing: committing. In general, this group is waiting later to marry, and when they do, they may choose to postpone having children or remain childless. Burdened by debt, they aren’t taking on loans for homes, cars and other items – even if they qualify for a mortgage.

What they are doing: renting dwellings. Mobile and unattached, twentysomethings on a professional track seem are making a major ripple in the ever-expanding pool of renters in America – those who either choose not to buy a home, or who are locked out of the process for economic reasons.

And the winner is: the income property investor, who can tap this expanding pool of young renters, who just may be the key to building wealth for the long term in rental real estate just the way Jason Hartman recommends.  (Top image:Flickr/COD)