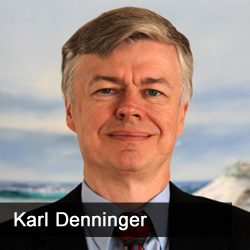 This episode of Flashback Friday was originally published: September 18, 2013

Karl Denninger is a technology expert and businessman, finance blogger, political activist and is sometimes referred to as a founding member of the Tea Party movement. Denninger was also the founder and CEO of MCSNet in Chicago.

Denninger is a founding contributor to the libertarian-oriented finance blog The Market Ticker, found at http://market-ticker.org. He uses his blog to levy harsh criticism of the criminal element who are wrecking the global financial system. In the aftermath of the March 2008 collapse of Bear Stearns, he founded the website Fed Up USA. He came to national attention for the criticisms of the Emergency Economic Stabilization Act of 2008 which he posted on Fed Up USA in September that year. Of special concern to Denninger was the over-the-counter trading of credit default swaps, as well as the high leverage of financial institutions; his objections to the bailout plan stemmed from the fact that it did not address either of these issues. He has also spoken out against high-frequency trading, particularly in the aftermath of the 2010 Flash Crash.

As a publicly outspoken and early member of the Tea Party movement, Denninger is sometimes referred to as a founder. On January the day of President Obama’s first inauguration, he published a blog post calling on readers to mail tea bags to the White House and Congress on February 1st, echoing a suggestion by a commenter on one of his earlier blog posts. However, Denninger later expressed concern with the Tea Party movement, specifically that establishment Republicans had hijacked it and perverted its original goals.

* Read more from JasonHartman.com
Jason Hartman: “Thou Shalt Invest in Quality.”
Inflation’s Low – Is That a Good Thing?