Inflation’s Low – Is That a Good Thing? 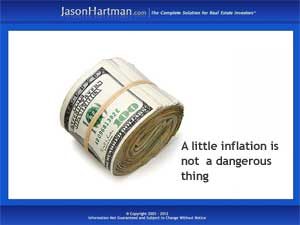 According to a new Business Insider report, inflation is hovering around one percent. That’s a good thing, right? Not so fast. Mild inflation actually helps the economy – and, as Jason Hartman always says, it can be an investor’s friend.

Most Americans believe that any inflation, however small, is harmful. The dollar buys less and prices seem higher. But now the Federal Reserve, which sets monetary policy and regulates interest rates, says inflation really should go up to help keep the economy on track toward recovery.

What is this thing called inflation anyway? Simply put, it’s a rise in the overall prices of goods and services over a period of time. When that general price level goes up, each unit of currency – dollar, pound, euro and others – is able to buy fewer equivalent goods and services than previously. That means that the purchasing power of any unit of money is reduced.

Everybody knows the negative effects of inflation – the dollar doesn’t go as far, as the saying goes, and the same amount of money doesn’t buy as much. In worst-case scenarios, consumers don’t buy as much or, worse, they start hoarding goods against more price increases in the future.

But the lesser known upsides of inflation can actually boost a consumer economy – because just as purchasing power goes down, so does the value of debt. The Fed can adjust interest rates down, and that encourages some kinds of investment.

The value of so-called “good” debt such as a mortgage goes down too, and that’s why inflation can be a very good thing indeed for income property investors. The value of a loan borrowed in pre-inflation days ends up being lower in inflationary times, depending on the amount of inflation. That, say economists, encourages borrowing and spending, which in turn encourages movement in the economy.

That’s why at this point the Fed is looking for a small bump in the level of inflation: not enough to depress spending and trigger those stagnant conditions that stall growth, but just enough to boost borrowing.

And for income property investors leveraging debt to build wealth as Jason Hartman recommends, when inflation rises, the dollars of a long-term mortgage may end up going much farther than they used to.  (Top image:Flickr/imagesofmoney)

The Dollar: Still A Go-To Currency