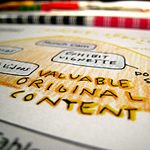 At some point in the not-so-distant future, Internet marketers and online entrepreneurs are going to look back at the over-optimized, barely-not-spam, wordage-disguised-as-online-content and laugh at the folly of it all. The Internet really didn’t begin until January 1996, when Google went live, and online salesmen have been waging a war to be listed at the top of search results ever since.

At first, it was relatively easy to game the new gangly kid on the block. Stuff your keyword a thousand times at the bottom of the document and expect a high ranking. Then Google got wise to that ploy and keyword spammers resorted to still typing it thousand times but this time the same color as the page background so it wouldn’t look like they were stuffing.

As the monster search engine grew and became more sophisticated and based results on a complex algorithm that changed the game periodically, internet marketing became a contest of trying to stay one step ahead of Google without getting caught using black hat tactics that would get you banned from results, the veritable kiss of death. Years rolled past and the phrase search engine optimization became the mantra. Put your keyword in the title! Pay attention to keyword density! Fill out your meta tags properly!

At the Creating Wealth Show, we think that the end game is nigh. Google has been progressing toward the one overarching goal of providing the best search results based on legitimate online content and there’s a good chance they’re getting close. While keyword stuffers and spammers will always be among us because the compulsion to game the system is congenital with some people, those who have hewn to the standard of producing educational, sometimes entertaining content that can be read and enjoyed by an actual human being know the day is coming when Google learns to recognize good online content and reward it with a high search engine position.

Have you ever stopped to consider the number of pixels wasted on absolute crap content on a daily basis? Well, each year the crap works less and less. Some day it won’t work at all and, on that day, legitimate online content will be crowned king.