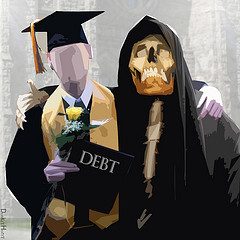 Debt can get you in trouble in so many different ways, with student loans being one a shining example. These days, the debt load for college and vocational school graduates is so high that it interferes with their ability to secure one of the critical components of the American Dream – home ownership. To properly grasp the immensity of the problem, let’s look at some numbers.

Student loans now total more than $865 billion dollars. That’s more than all outstanding credit card debt in the United States! It works out to about $25,000 for each and every college graduate. When you consider that banks are already nervous about loaning money in general, it’s no surprise to find they’re especially leery about offering mortgages to fresh-out-of school students who are normally employed on the low end of the pay scale.

Hmmm…low income, high debt. Not a recipe for home ownership.

But as with most things in life, there’s another side to the coin. While it’s true a certain percentage of graduates will head home to bunk with with mom and dad for a few years, it also means others will be forced to rent. After all, everybody’s got to live somewhere. That’s one of Jason Hartman’s Rule of Universal Needs. This is great news for landlords or those who might be contemplating whether or not it’s a good time to get into residential real estate investing.

The short answer: Your timing couldn’t be better.

Once again, the numbers are staggering. Six million 25-34-year-olds have moved back in with their parents. Though the job outlook still remains bleak and their student loan debt load high, they aren’t going to be happy living under their parents’ roof forever. This is a serious pent up demand that will be released some day, which is why you should be making plans NOW to enter real estate investing by buying income properties. If you have a stash of cash you’ve been afraid to dump into the Wall Street black hole, buying a property almost guarantees an increased rate of return over what you are probably used to.

At JasonHartman.com, we regularly have access to properties you can get into for as little as $5,000 down – Atlanta is one of the hot markets for these kind of deals. But even if you opt for traditional financing, interest rates have never been better or the selection of properties larger for new investors.