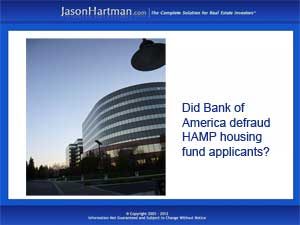 Ever since it was created back in 2008 to help homeowners avoid foreclosures, the government’s Home Affordable Mortgage Program, or HAMP, has fallen far short of its goals. Because that’s so, large numbers of preventable foreclosures have hit the market in some areas, skewing assessments of the housing recovery. Now, thanks to a new lawsuit filed against perennial bank fraud perpetrator Bank of America, at least one reason for the failure of HAMP has come to light.

According to a new CNBC finance report, the latest in the seemingly endless round of lawsuits against Bank of America alleges that the bank deliberately denied HAMP modifications to eligible mortgage holders. Affidavits filed in the case reveal that BofA employees were instructed to lie to customers and stall their applications to allow Bank of America to make more money.

After the housing collapse that hinged on irresponsible lending practices, the nation’s biggest banks were sued for widespread abuses having to do with the foreclosure process. That led to a settlement, more suits and new legislation such as the Dodd Frank Act to protect consumers. But as former Bank of America employees revealed, the company continued to manipulate struggling homeowners – even as it launched new campaigns to demonstrate that it had reformed its ways.

HAMP is one of several federally supported mortgage modification programs that allow eligible property owners – and investors – to refinance at very low rates. It’s offered through lenders like BofA alongside their own in-house loan products. And that’s where the abuses lie. CNBC reports that bank employees were told to deny HAMP modifications to eligible applicants and stall submitted applications in order to steer these customers to the bank’s own loan products – at much higher rates.

That, say these former bank employees, allowed Bank America to collect more from the loans in tees and interest, and also allowed the bank to file more foreclosure actions against mortgage holders who failed to meet the provisions of the in house loans or who chose not to apply. Abuses recounted by these employees included bonuses to employees who processed the most foreclosures, and routinely denying HAMP applications over 60 days old.

The fees associated with the foreclosure process provide a steady stream of revenue for mortgage servicers. That makes it less lucrative to structure loan modifications through programs like HAMP, since the bank gets a better payoff if eligible homeowners are simply denied and put into foreclosure.

If charges of lying to mortgage holders aren’t bad enough, the suit also charges that Bank of America also lied to HAMP’s government overseers about the number of modifications it had actually done through the program. That disjunct between reported numbers and the actual outcomes – more foreclosures – support concerns by HAMP administrators that people who should have gotten help to keep their homes simply didn’t.

Bank of America’s post-settlement performance is being overseen by outside monitors who plan to relapse a report on its progress in July 2013, and these new allegations will be added to the growing list of violations continuing to come to light. But they are coming to light – and as Jason Hartman advises investors in income property, staying informed and educated about the market and its secrets is the key to staying in control. (Top image/Flickr/gorogen)