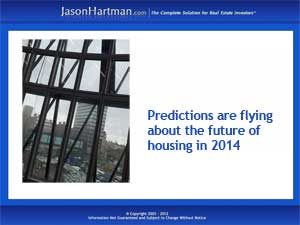 The new year is only a few days old, and some of the promised changes to the housing landscape are already in place. The Federal Reserve will begin to implement its stimulus “taper down” and the tighter lending rules ushered in by the Consumer Finance Protection Bureau are now in place. So what does all of that mean for housing in the coming year?

According to recent stats, US home prices continue to appreciate in most areas across the country. But according to investor David Campbell, the apparent health of the housing market may be an illusion, propped up by the Fed’s massive stimulus program, which was intended to boost economic growth in housing and other sectors of the economy by lowering interest rates.

The stimulus is going to start winding down, the Fed says, so interest rates will likely begin to rise, and that means higher rates for mortgages, as well as other kinds of consumer loans. But because the stimulus was aimed largely at rescuing the housing market, some financial experts expect a slowdown in home purchases because of that and more stringent loan standards.

Another issue affecting the housing market in the coming year is the lurking shadow of unsold foreclosures that are still held by banks and other financial institutions. As these institutions try to get rid of those so-called “vampire” and “zombie” properties, the foreclosure pipeline, which had slowed to a trickle in many areas, could open up again, flooding markets around the country with low-priced homes for sale.

And who will buy those homes? Mortgage standards are tighter thanks to the Qualified Mortgage Rule which took effect on January 10, 2014. Although banks can sell any loans they want, including the disastrous short term adjusted rate ones that created chaos in 2008, they could face prosecution if those loans go bad. That means more caution on the part of lenders, which may mean more would-be homeowners are shut out of the process.

One key factor in successful home buying is a healthy employment picture, and although newly released figures show a modest growth in jobs and an equally modest decline in unemployment in some areas, economists point out that those numbers might be illusory too, since hey don’t reflect the numbers of people who simply aren’t looking for work at all. That may mean that the market for rental housing will continue to expand.

The economic picture is a patchwork heading into the new year. But for investors taking Jason Hartman’s advice on building wealth from income property, the housing glass still looks half full, not half empty. (Top image:Flickr/cooperweb)

Get investing secrets from the pros at Jason Hartman’s Meet the Masters of Investing Event in Irvine, CA this January 19=8-19, 2014.  Learn more here.