Whats in a Name? Big Bucks in the Housing World 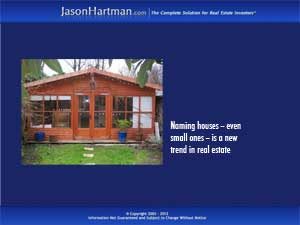 Rockport by the Sea. Whitecrest, Quarry House. In earlier times, only the great country estates were worthy of bearing a name. But now, US homes both large and small are carrying names both stately and whimsical – and the trend may mean big bucks when the property is sold.

The trend in naming properties is ancient, and until fairly recently it was reserved for the gentry – ancestral estates, properties conferred by the crown or other means. In the US, the great industrialists and robber barons of the early days of the century often owned those properties. But according to a recent article in The Wall Street Journal online, the trend in naming house has spread to include properties large and small, historic and new, all across the country.

Although some real estate professionals say that it’s pretentious and a little silly to attach names to any house that’s less than a luxury estate worth at least $20 million, housing market studies show that in numerous sales, it’s the name that makes the difference in a purchase – often contributing to a higher purchase price.

But not just any name will do. Industry professionals point out that in order to boost its desirability, a property’s name must be evocative and romantic sounding, suggestive of a distinguished pedigree. Whimsical, unattractive and “cute” house names may be off-putting, they say, citing homes with names such as Elephant Rock in California or Flip Flops in North Carolina – names that could turn potential buyers off, even if all other aspects of the property are just what they want.

“Soft” factors like this – the intangibles that contribute to a buyer’s feelings about the place– are frequently precisely the ones that may drive buyers more strongly than the “hard” features such as location and number of bedrooms. A home’s name evokes a whole array of feelings and associations that trigger buyer’s subconscious responses.

Of course, a name is just a name – and there’s nothing wrong with changing a home’s name once it’s purchased. Unless the property is a designated historical site, there’s no registry of home names. And owners of smaller homes are freer to make those naming choices than those owning high profile properties.

Since property names aren’t fixed in stone, finding a soothing, evocative name that adds to a home’s appeal might even become a part of the selling process – a subtle way of enhancing the desirability of a house and even suggesting greater worth. In a volatile housing market still struggling to overcome the slump of a few years ago, any strategy is fair game – and in some situations, factors as frivolous as naming a property are making the difference between a sale and a bust. For  investors working with Jason Hartman’s investing recommendations, knowing what’s in a name is all a part of keeping up with the changes in the housing marketplace.  (Top Image: Flickr/EGFocus)