What Makes a Bubble? The Cycle of Boom and Bust 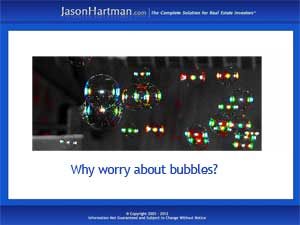 Take a look at most any financial news today, and you’ll see the word “bubble” bouncing around. There’s the possibility of a student loan bubble, an interest rate bubble driven by the Fed’s bond buyuo, and so on. And of course where there’s a bubble, there’s also a bust, so when financial experts and trend watchers start worrying about a possible bubble, it’s time to take cover. But what makes a bubble anyway? And why do bubbles strike fear into the hearts of economists?

A recent guest post on the venerable finance site The Motley Fool attempted to find some explanations. And it turns out that the hot air that fills an economic bubble may be nothing more than a belief.

The term “bubble” first hit the headline sin connection with the granddaddy of all bubbles — the housing collapse of 2008. Before the collapses, there was the bubble – home prices were rising, housing market professionals believed they’d continue to rise, and easy mortgage lending ensured that there would continue to be buyers for all those homes.

But eventually, belief and reality met head to head and mortgages fell into default, causing the bottom to fall out of the housing market – the bust that happens when the bubble bursts. Based on this pattern, financial trend watchers are now worrying about a similar cycle related to out of control student loan debt. Fueled by the belief that rising college costs are inevitable and that loan debt is just a part of getting a degree, both private and federal loans are easy to get for large amounts. But they set students up for a burden they can’t sustain after they graduate.

Something similar may be happening in connection with the Federal Reserve’s bond buyup, a program that regularly changes direction in response to the ups and downs of various economic indicators. Because one reason for the plan is to provide a stimulus for housing by keeping interest rates low so more buyers can purchase homes, some financial experts fear that when the Fed finally does scale back its buyup, rates will rise along with housing prices in a cycle that can’t be sustained.

The Fed’s bond buyup both affects the market and is affected by it. As indicators such as housing activity or gains in employment suggest a rosier economic outlook, Fed officials start talking about scaling back. If those and other indicators are down, then the Fed announces plans to accelerate the buyup.

That’s the way bubbles appear to work. Beliefs drive behaviors which then reinforce those beliefs, until the entire construct bursts and crashes. The takeaway for investors working with Jason Hartman’s principles for wealth building? When talk of a bubble floats up, it’s wise to take a look at what creates the hot air inside.   (Top image: Flickr/lvstealth)

Rising Home Prices: Setting the Stage for Another Crash?