Ven: A Digital Currency For a New Age 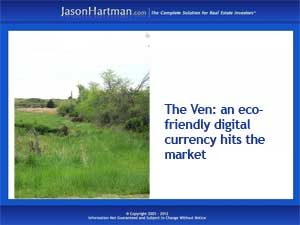 With the Bitcoin making world headlines, can other digital currencies be far behind? As the Bitcoin gains strength as a legitimate exchange for real goods all over the world, other kinds of digital monies are popping up too. And the creators of these specialized currencies are using the Bitcoin model to develop alternate monetary systems aimed at specific groups and cultures.

The Ven is one of those lesser-known digital currencies. It’s the coin of choice for members of Hub Culture, a business and networking organization for entrepreneurs and international travelers. And while it began as simply an environmentally friendly medium of exchange for the members of Hub Culture itself, it’s grown beyond that into a currency that ‘s recognized and rated by the world’s financial markets. The Ven’s rise to prominence offers a blueprint for creating alternative monies that challenge traditional concepts for money.

According to a recent CoinDesk interview with Hub Culture’s founder, Stan Stalnaker, the Ven was created to meet Hub Culture’s need for a way to conduct transactions within the organization’s global network of members. Unlike the Bitcoin, the Ven does have a backing organization, which controls the coin: Hub Culture’s own social network. The Ven is backed by insurance and includes options to buy carbon credits, so it also has environmental appeal.

Lie the Bitcoin, the Ven can be bought using hard currency or mined using computer algorithms, which lets people grow their own stockpile of the coins. And the Ven is completely digital too, which eliminates the need for a physical version of the currency.

Because the Ven is so closely tied to Hub Culture’s social network, Stalnaker maintains that it’s more secure than the Bitcoin and unlikely to be sued for cybercrime – a prime concern for opponents of the Bitcoin and other digital currencies. Because the Ven is backed by reserves and inherently stable within its network, some of the major issues with Bitcoin may not apply.

The Ven’s relationship to carbon trading makes it unique among the new digital currencies. Its creators also see a future for the Ven in the world of microfinance – a lending option that helps very small startups often in less developed parts of the world.

But that’s far into the Ven’s future. For now, though, the creation of the Ven opens another door into the rapidly growing world of digital currency – and more evidence that, as Jason Hartman says, cybermoney is here to stay. (Top image: Flickr/jplevine)

Learn investing secrets from the pros at Jason Hartman’s Meet the Masters of Investing Event in Irvine, CA January 18-19.2014.  Find out more here: