The US Rental Market: Headed for a Slowdown? 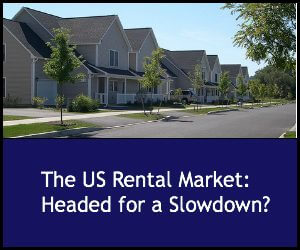 Is the red-hot rental market getting ready to cool down?

The US housing market continues to recover, fueled by promising numbers for employment and other consumer sectors. But major shifts in the housing landscape may be changing all that, as the balance tilts between renting and owning houses in 2015 and beyond.

The devastating crash of 2008 that left the housing sector in tatters and created conditions for dramatic changes in the way Americans choose and maintain places to live. When a combination of reckless lending and unprepared buyers led to large-scale mortgage defaults and foreclosures, the effects were felt throughout all aspects of the housing industry.

Among these effects: shortages of available houses to buy, tougher mortgage lending standards, and a boom in the rental market. Now, though, the consequences of all these things are tipping the balance in the housing market again – and that may mean changes in strategy for investors building a portfolio in rental income property.

Though the housing market began to recover in 2009 and beyond, home buying stayed relatively flat – but rental demand began to surge. A sluggish economy with an uncertain job outlook meant that homeownership was out of the question for many people. Not only that, in the aftermath of the housing crisis new lending standards imposed by the government made it more difficult to qualify for a mortgage.

What’s more, there were fewer houses available to buy. Construction of new dwellings ran behind demand, and exiting homes were either tied up in foreclosure proceedings or auctioned off in bulk to international investor consortiums. American home buying fell to its lowest levels in over two decades.

But for all these reasons and a few others the rental market was heating up. Those who couldn’t qualify for houses or who hose not to buy for reasons both personal and economic were seeking out rentals in markets across the country. And as demand increased so did rents.

But now, according to new data from the giant real-estate database Zillow and reports from other industry watchers, the rental market may be hitting its limits. In markets large and small, two trends may be responsible for the lowdown.

Rents have been steadily rising in the years after the crash, until in some markets they’re currently at or near record levels. That’s not just in high end high demand areas like Los Angeles and New York – it’s a trend in mid range and smaller markets too. And while local and state laws may put caps on the amount that landlords can raise rents in a given year, property owners can keep raising rents within those parameters.

In previous years, that might have been a self-defeating tactic for the landlord/entrepreneur who wanted to keep a property rented. Tenants could always choose to move rather than pay the increased rent.

But now, there’s a shortage of rental dwellings in many markets. The decline in homeownership and the increased demand for rental housing means that tenants are to an extent captive audiences, forced to pay whatever rent their landlord imposes because there’s no place to move.

That’s partly because of a surge in home buying by international investors with cash. In a move similar to the one that contributed to a shortage of homes for purchase after the housing crash, these groups are buying up single-family homes and complexes.

Though new stats reported by Zillow show that for many people, owning a home is half as expensive as renting, some renters who could buy a home are choosing not to – perhaps spooked by the specter of the housing collapse. Still others may be ready to take the plunge into home ownership – if they can meet down payment and credit requirements.

What does all this mean for investors working to build wealth in income property, as Jason Hartman recommends? The slowdown in home buying means more properties available for investors to purchase. And that means new opportunities to meet the continued demand for rental housing from a tenant pool that isn’t shrinking. (Featured image: Flickr/jvergara)

Source:
Yen, Jay. “Renting is Now Twice as Expensive as Buying Houses in the US.” USIHomes. ushihomes.com. 29 Dec 2014.