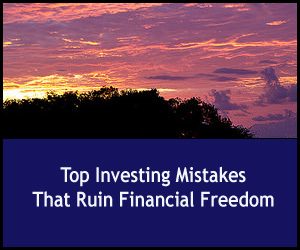 People can often be their own worst enemies – and that’s especially true when finances are involved. In a recent Flash Back Friday episode of the creating Wealth Show podcast, host Jason Hartman talks about ways investors sabotage themselves and their investing careers by making key mistakes.

Jason tells listeners that in the years he’s spent working in the world of real estate investing and entrepreneurship, he’s seen too many people miss out on building wealth because they’ve made common blunders that derail their investing plans. In many cases those blunders can be avoided or easily fixed. And that’s why he’s compiled a list of 30 typical mistakes and pitfalls for investors to watch out for.

As always, Jason warns listeners that Episode 549 of the Creating Wealth Show is pulled from the archives and not current. But the mistakes he discusses – and their remedies – are timeless. As Jason points out, human nature never changes, no matter what the circumstances are.

The investing mistakes Jason discusses aren’t limited to income property investing. They apply to investing in all its forms – and making them can affect every area of an investor’s financial life.

1. Investors don’t get out of their own way

Even with the best of intentions, people have a tendency to sabotage themselves in many surprising ways. They throw up needless obstacles, overanalyze situations and come up with a million reasons why they aren’t taking action.

But as Jason points out, “action is wisdom.” Taking any action is better than none. It can open doors and create opportunities that staying stuck never will.

“Paralysis by analysis” may actually be form of “intellectual snobbery,” Jason says – a curse of higher education. The more educated you are, the more you tend to overanalyze. And education that’s gotten in school may actually narrow perspectives rather than broaden them. By saying yes more often, and thinking less, you’ll build more wealth. Jason point south tat the more walls he’s set up in the past, the less he’s profited.

Nothing is going to be perfect. Investors who dwell on fairly minor bumps in their investing road may be ignoring the very real returns on the investment. For example an investor who has a difficult conversation with a property manager may be so frustrated he’s tempted to sell off his properties and abandon the whole investing plan. He’s ignoring the very real returns that he’s reaping, and which he’ll lose in the long run.

Dwelling on those small things that are largely fixable can blind an investor to the bigger picture of the overall investing goals. Getting hung up on the little things derails the big plans.

At least in the right way. Jason points out that most education in school doesn’t’ teach you how to succeed. And it can lead to over analyzing and thinking in limited ways. His Platinum Properties Investor Network and events like the Creating Wealth Bootcamp offer the kind of knowledge they don’t teach in school – real ways to think differently and build wealth.

The movie “Wall Street” popularized the idea that “greed is good.” And some greed can be. But investors who get too greed about things like raising rents can end up sabotaging themselves.

6. Not listening to your property manager

“Managing your manager’ is essential for investing success. And that means knowing when to listen to your manager and when not to. It can be hard to know what to do about a manager’s recommendations. But the investing counselors at the Platinum Property Investor Network are always ready to help.

7. Listening to your property manager

For the same reasons, it can be problematic to listen to a property manager. A good example has t do with raising rents. Property managers may not want to impose an annual rent hike even though it’s perfectly reasonable and legal to do so. Once again, checking in with the counselors at PPIN can help.

8. Not having an “area agnostic” investment counselor

Financial managers and brokers usually have an agenda: to sell an investor a lot of products, not to help them make sound investing decisions. That’s why itt’s important to have an investment counselor on your side, who can offer objective feedback and information. The best advisers are those with: cred” – who’ve done it themselves, like Jason has.

Investors run into trouble when they don’t keep in touch with their investment counselor and talk through problems that arise. Keeping in contact with all the people on the team –investment counselors, property managers and others – is essential for keeping the investment plan on track.

Ever heard the phrase, “that money’s burning a hole in his pocket”? B\Rushing into a property purchase because you’re afraid there won’t be another good deal or other reasons can lead to grief down the line. And there’s also …

This is more of a problem for investing success. Investors run into a relatively small and fixable problem and immediately decide to give up and sell off their investment properties. Attempting to get rid of a short-term difficulty puts an end to any chance of a long-term return.

People say no, when many times they should be saying yes. “Yes” opens doors; “no” closes them and insulates you from life. “Yes” might lead to mistakes but also opportunities.

Leverage drives real estate investing success, and Jason is all for using Other People’s Money to build an investing portfolio. But people all too often don’t do this prudently and get in over their heads. Leverage is powerful tool – and it needs to be treated with respect.

It’s a good idea to have a reserve of 4 percent of the value of a property in the bank against downturns and emergencies. For a $100,000 property, that would be $4000. Keep that money separate from your personal emergency reserves.

14. Not preparing for contingencies

It’s important to be realistic. Things can happen, and it’s wise to plan for them. Having a reserve is one way to cover those contingencies.

15. Failing to see things in context – and making irrational decisions

Author Steven Covey once said, “ The major thing is to keep the major thing, the major thing.” Too often investors get caught up in small things and fail to see the big picture of their investing goals. That can lead to some ill-conceived and hasty decisions.

16. Changing the financial picture without a stable foundation

Risk taking is a part of the investor’s journey. But it’s important to take those leaps to a new level from a relatively stable starting point. Don’t make major investing decision if your finances or home life can’t support it.

17. Listening to your personal sphere of influence

Parents and friends are only too happy to offer investing advice. But if they haven’t achieved much in the way of building wealth, their advice probably isn’t wor5th much. Make your big decisions with the help of those who’ve walked the walk.

Being optimistic is good, but it’s important to keep investing expectations realistic and actionable. Know what you’re expecting before making the leap.

19. Not remaining in control

“Thou shalt keep control’ is the third of Jason’s Ten Commandments for Investing Success, and it’s the one many people break. Turning over your investing money and plans to third parties can lead to ruin. They might be crooks. They might be incompetents. And either way, they’ll charge you a lot of money. That’s why it’s best to work with an experienced investment counselor who’s aligned with your investing goals – and has no hidden agenda.

The list Jason offers in this episode is not complete. There are plenty of other mistakes he’s noticed in over two decades in the field. But they’ll be the topic for another episode of the Creating Wealth Show. The key to avoiding these and other blunders is to understand them. As Always knowledge is the key to long term investing success.(Featured image: Flickr/gorfor)