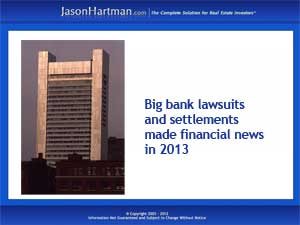 This New Year is gearing up to open on a financial world that looks very different in some ways from the one just ending. Throughout 2013, we’ve been following the financial and investing stories that change our world and rock our assumptions. Here’s a year-end recap of the major stories we covered in 2013.

1. The Government Shutdown
When lawmakers and the President couldn’t agree on budget issues, the Federal government shut down from October 1 to 15, 2013. Until a compromise was reached, agencies and services small and large all over the country were shuttered and employees placed on “hiatus.” National parks were closed and the Internal Revenue Service telephone lines unanswered, but taxpayers were till expected to meet IRS filing deadlines and the Bureau of Housing and Urban Development kept its mortgage services available to avoid compromising the housing recovery.

2. The Bitcoin
Although it’s been around for a while, the Bitcoin came into its own in 2013, trading higher than ever in the money markets and taking its place alongside other currencies for purchases like big-ticket cars, fertility treatments and trips around the world, A Bitcoin miner in the UK made headlines for tossing out a hard drive containing $7.5 million of the digital currency, and the Bitcoin and other digital currencies like the Ven and the Litecoin changed the way the world thinks about money.

3. Quantitative Easing 3
Will they or won’t they? The Federal Reserve spent much of 2013 sending mixed messages about its massive bond buying stimulus plan, known as Quantitative Easing, or QE3. First launched in 2012, the plan to keep interest rates low by pumping money to lenders involved buying up to $85 billion in mortgage backed securities and bonds – per month. As indicators like employment and housing began to improve, the Fed hinted that it would begin to “taper” the plan, then reversed course, finally announcing a modest tapering to start in 2014.

4. Bank Fraud Settlements
2013 was a very bad year for the nation’s big banks, as major institutions Bank of America, JP Morgan Chase and Citigroup settled lawsuits stemming from domestic bank fraud and international money market manipulation to the tune of billions of dollars. The fallout from these suits included stricter consumer protection laws, higher fees to customers, and more lawsuits from institutions at home and abroad.

5. Seasteading
The future is now for the folks at the Seasteading Institute and other bodies planning to create floating independent cities on the world’s oceans. Advocates of seasteading see the plan as an experiment in human societies and a new revolution of independence, and finance experts point to new opportunities for investing and industry.

In a digital world, things move swiftly. For investors following Jason Hartman’s recommendations on building wealth through income property, the future is now– as fast moving trends change the local and global financial landscape in a heartbeat. (Top image: Flickr/paveldobrov)

Get investing secrets from the pros at Jason Hartman’s Meet the Masters of Investing Event in irvine, CA January 18-19, 2014.  Learn more here.