The Wisdom of Mark Twain: Frogs for Breakfast 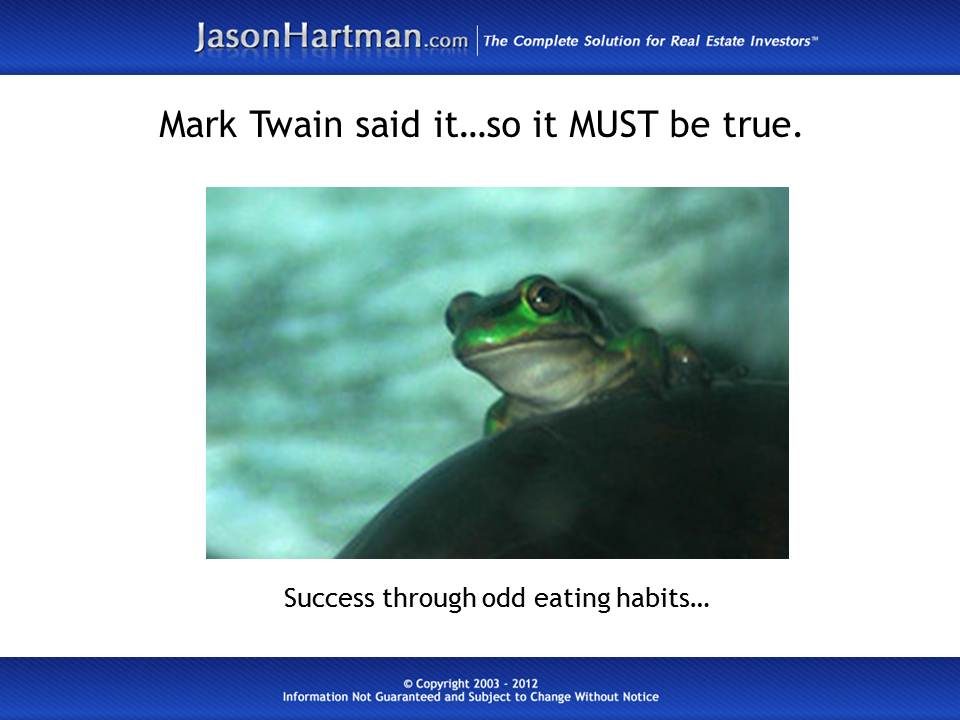 Habits have the power to make or break your financial success. Good habits. Bad habits. Habits are a powerful thing and most of us have a bushel full of bad ones holding us back from being all we can be (thank you U.S. Marine Corps).

After more than two decades using real estate sales and income property investing as his sole source of income, it’s safe to say Jason Hartman has seen a lot happen in the industry and learned a lot more. And if there’s one thing he’d like to suggest to all the up-and-comers or even the old-and-still-kicking-gluteus maximus crowd is that it makes all the difference in the world to start your work day strong. Most people acknowledge the value of being a strong closer, but to use a sports analogy, most coaches prefer to play from ahead than behind.

What you get done in that first hour can set the tone for, not only the day, but the ultimate fruit of your working life. Does that sound too heavy? Trust us, it’s that important.

If your boss had any real idea of how much precious time you fritter away jumping over to check or respond to e-mail dozens of times a day, he’d probably fire you. Luckily, you don’t have to worry about that because he’s too busy checking his e-mail to notice.

Here’s the lowdown: don’t check your e-mail for at least the first hour in the morning. It won’t kill you; we’re pretty sure of that. The early morning inbox train wreck is, in our humble opinion, the #1 derailer of productivity in the known universe. You’re not going to miss anything urgent. That’s what phone calls and texts are for.

Is this your typical morning? Stumble into the office bleary-eyed, shirt mis-buttoned and socks on backwards, plop yourself down in front of the laptop or tablet with coffee in hand, thinking you’ll ease into the day by responding to a few e-mail messages before getting down to serious business. Before you know it, your fingers are hopping here and there and everywhere as you fire off a few dozen responses to stuff that barely registers on the scale of importance.

This, my friend, makes you a time waster, and while you’re occupied with irrelevance, Donald Trump (brilliant self-promoter or near psychopath?) just closed three more real estate deals.

We’ll finish this thought by saying you should start every day by picking up a frog and eating it. Not literally. The idea comes from writer/humorist Mark Twain, who commented that if you ate a live frog first thing every morning, the day couldn’t help but get better.

There’s much wisdom in that way of thinking. Rather than running to your computer and obsessively checking e-mail for the latest Groupon deal, try buckling down and getting one of those tasks accomplished that you’ve been avoiding.

In other words, eat that live frog for breakfast. You’ll be a better, more successful human being and business person when you do. (Top image: Flickr | cheetah100)